Literary Friends and Acquaintance; a Personal Retrospect of American Authorship 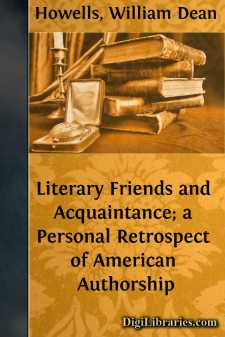 Long before I began the papers which make up this volume, I had meant to write of literary history in New England as I had known it in the lives of its great exemplars during the twenty-five years I lived near them. In fact, I had meant to do this from the time I came among them; but I let the days in which I almost constantly saw them go by without record save such as I carried in a memory retentive, indeed, beyond the common, but not so full as I could have wished when I began to invoke it for my work. Still, upon insistent appeal, it responded in sufficient abundance; and, though I now wish I could have remembered more instances, I think my impressions were accurate enough. I am sure of having tried honestly to impart them in the ten years or more when I was desultorily endeavoring to share them with the reader.

The papers were written pretty much in the order they have here, beginning with My First Visit to New England, which dates from the earliest eighteen-nineties, if I may trust my recollection of reading it from the manuscript to the editor of Harper's Magazine, where we lay under the willows of Magnolia one pleasant summer morning in the first years of that decade. It was printed no great while after in that periodical; but I was so long in finishing the study of Lowell that it had been anticipated in Harper's by other reminiscences of him, and it was therefore first printed in Scribner's Magazine. It was the paper with which I took the most pains, and when it was completed I still felt it so incomplete that I referred it to his closest and my best friend, the late Charles Eliot Norton, for his criticism. He thought it wanting in unity; it was a group of studies instead of one study, he said; I must do something to draw the different sketches together in a single effect of portraiture; and this I did my best to do.

It was the latest written of the three articles which give the volume substance, and it represents mare finally and fully than the others my sense of the literary importance of the men whose like we shall not look upon again. Longfellow was easily the greatest poet of the three, Holmes often the most brilliant and felicitous, but Lowell, in spite of his forays in politics, was the finest scholar and the most profoundly literary, as he was above the others most deeply and thoroughly New England in quality.

While I was doing these sketches, sometimes slighter and sometimes less slight, of all those poets and essayists and novelists I had known in Cambridge and Boston and Concord and New York, I was doing many other things: half a dozen novels, as many more novelettes and shorter stories, with essays and criticisms and verses; so that in January, 1900, I had not yet done the paper on Lowell, which, with another, was to complete my reminiscences of American literary life as I had witnessed it. When they were all done at last they were republished in a volume which found instant favor beyond my deserts if not its own.

There was a good deal of trouble with the name, but Literary Friends and Acquaintance was an endeavor for modest accuracy with which I remained satisfied until I thought, long too late, of Literary Friends and Neighbors. Then I perceived that this would have been still more accurate and quite as modest, and I gladly give any reader leave to call the book by that name who likes.

Since the collection was first made, I have written little else quite of the kind, except the paper on Bret Harte, which was first printed shortly after his death; and the study of Mark Twain, which I had been preparing to make for forty years and more, and wrote in two weeks of the spring of 1910. Others of my time and place have now passed whither there is neither time nor place, and there are moments when I feel that I must try to call them back and pay them such honor as my sense of their worth may give; but the impulse has as yet failed to effect itself, and I do not know how long I shall spare myself the supreme pleasure-pain, the "hochst angenehmer Schmerz," of seeking to live here with those who live here no more....