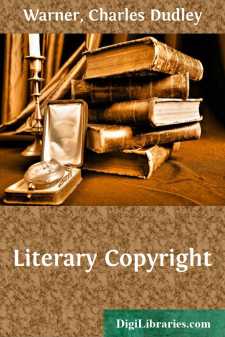 At the annual meeting of the Social Science Association on September 4, 1899, at Saratoga Springs, the members of the Institute voted to organize independently. They formally adopted the revised constitution, which had been agreed upon at the first meeting, in New York in the preceding January, and elected officers as prescribed by the constitution.

The object is declared to be the advancement of art and literature, and the qualification shall be notable achievements in art or letters. The number of active members will probably be ultimately fixed at one hundred. The society may elect honorary and associate members without limit. By the terms of agreement between the American Social Science Association and the National Institute, the members of each are 'ipso facto' associate members of the other.

It is believed that the advancement of art and literature in this country will be promoted by the organization of the producers of literature and art. This is in strict analogy with the action of other professions and of almost all the industries. No one doubts that literature and art are or should be leading interests in our civilization, and their dignity will be enhanced in the public estimation by a visible organization of their representatives, who are seriously determined upon raising the standards by which the work of writers and artists is judged. The association of persons having this common aim cannot but stimulate effort, soften unworthy rivalry into generous competition, and promote enthusiasm and good fellowship in their work. The mere coming together to compare views and discuss interests and tendencies and problems which concern both the workers and the great public, cannot fail to be of benefit to both.

In no other way so well as by association of this sort can be created the feeling of solidarity in our literature, and the recognition of its power. It is not expected to raise any standard of perfection, or in any way to hamper individual development, but a body of concentrated opinion may raise the standard by promoting healthful and helpful criticism, by discouraging mediocrity and meretricious smartness, by keeping alive the traditions of good literature, while it is hospitable to all discoverers of new worlds. A safe motto for any such society would be Tradition and Freedom—'Traditio et Libertas'.

It is generally conceded that what literature in America needs at this moment is honest, competent, sound criticism. This is not likely to be attained by sporadic efforts, especially in a democracy of letters where the critics are not always superior to the criticised, where the man in front of the book is not always a better marksman than the man behind the book. It may not be attained even by an organization of men united upon certain standards of excellence. I do not like to use the word authority, but it is not unreasonable to suppose that the public will be influenced by a body devoted to the advancement of art and literature, whose sincerity and discernment it has learned to respect, and admission into whose ranks will, I hope, be considered a distinction to be sought for by good work....