Literary Boston as I Knew It (from Literary Friends and Acquaintance) 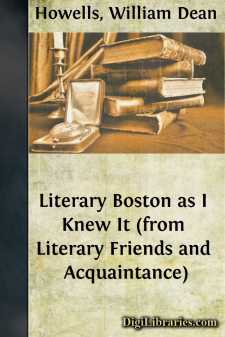 I do not think that such a fact would now move the fancy of the liveliest newspaper man, so much has the West since returned upon the East in a refluent wave of authorship. But then the West was almost an unknown quality in our literary problem; and in fact there was scarcely any literature outside of New England. Even this was of New England origin, for it was almost wholly the work of New England men and women in the "splendid exile" of New York. The Atlantic Monthly, which was distinctively literary, was distinctively a New England magazine, though from the first it had been characterized by what was more national, what was more universal, in the New England temperament. Its chief contributors for nearly twenty years were Longfellow, Lowell, Holmes, Whittier, Emerson, Doctor Hale, Colonel Higginson, Mrs. Stowe, Whipple, Rose Terry Cooke, Mrs. Julia Ward Howe, Mrs. Prescott Spofford, Mrs. Phelps Ward, and other New England writers who still lived in New England, and largely in the region of Boston. Occasionally there came a poem from Bryant, at New York, from Mr. Stedman, from Mr. Stoddard and Mrs. Stoddard, from Mr. Aldrich, and from Bayard Taylor. But all these, except the last, were not only of New England race, but of New England birth. I think there was no contributor from the South but Mr. M. D. Conway, and as yet the West scarcely counted, though four young poets from Ohio, who were not immediately or remotely of Puritan origin, had appeared in early numbers; Alice Cary, living with her sister in New York, had written now and then from the beginning. Mr. John Hay solely represented Illinois by a single paper, and he was of Rhode Island stock. It was after my settlement at Boston that Mark Twain, of Missouri, became a figure of world-wide fame at Hartford; and longer after, that Mr. Bret Harte made that progress Eastward from California which was telegraphed almost from hour to hour, as if it were the progress of a prince. Miss Constance F. Woolson had not yet begun to write. Mr. James Whitcomb Riley, Mr. Maurice Thompson, Miss Edith Thomas, Octave Thanet, Mr. Charles Warren Stoddard, Mr. H. B. Fuller, Mrs. Catherwood, Mr. Hamlin Garland, all whom I name at random among other Western writers, were then as unknown as Mr. Cable, Miss Murfree, Mrs. Rives Chanler, Miss Grace King, Mr. Joel Chandler Harris, Mr. Thomas Nelson Page, in the South, which they by no means fully represent.

The editors of the Atlantic had been eager from the beginning to discover any outlying literature; but, as I have said, there was in those days very little good writing done beyond the borders of New England. If the case is now different, and the best known among living American writers are no longer New-Englanders, still I do not think the South and West have yet trimmed the balance; and though perhaps the news writers now more commonly appear in those quarters, I should not be so very sure that they are not still characterized by New England ideals and examples. On the other hand, I am very sure that in my early day we were characterized by them, and wished to be so; we even felt that we failed in so far as we expressed something native quite in our own way. The literary theories we accepted were New England theories, the criticism we valued was New England criticism, or, more strictly speaking, Boston theories, Boston criticism.

Of those more constant contributors to the Atlantic whom I have mentioned, it is of course known that Longfellow and Lowell lived in Cambridge, Emerson at Concord, and Whittier at Amesbury. Colonel Higginson was still and for many years afterwards at Newport; Mrs. Stowe was then at Andover; Miss Prescott of Newburyport had become Mrs. Spofford, and was presently in Boston, where her husband was a member of the General Court; Mrs. Phelps Ward, as Miss Elizabeth Stuart Phelps, dwelt in her father's house at Andover. The chief of the Bostonians were Mrs. Julia Ward Howe, Doctor Holmes, and Doctor Hale. Yet Boston stood for the whole Massachusetts group, and Massachusetts, in the literary impulse, meant New England. I suppose we must all allow, whether we like to do so or not, that the impulse seems now to have pretty well spent itself. Certainly the city of Boston has distinctly waned in literature, though it has waxed in wealth and population. I do not think there are in Boston to-day even so many talents with a literary coloring in law, science, theology, and journalism as there were formerly; though I have no belief that the Boston talents are fewer or feebler than before. I arrived in Boston, however, when all talents had more or less a literary coloring, and when the greatest talents were literary. These expressed with ripened fulness a civilization conceived in faith and brought forth in good works; but that moment of maturity was the beginning of a decadence which could only show itself much later. New England has ceased to be a nation in itself, and it will perhaps never again have anything like a national literature; but that was something like a national literature; and it will probably be centuries yet before the life of the whole country, the American life as distinguished from the New England life, shall have anything so like a national literature. It will be long before our larger life interprets itself in such imagination as Hawthorne's, such wisdom as Emerson's, such poetry as Longfellow's, such prophecy as Whittier's, such wit and grace as Holmes's, such humor and humanity as Lowell's....