Lippincott's Magazine of Popular Literature and Science Volume 17, No. 100, April, 1876 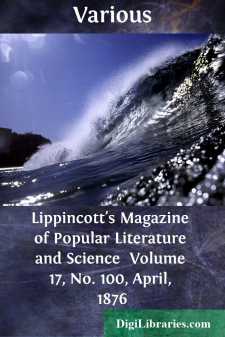 None of the European exhibitions we have sketched partook of the nature of an anniversary or was designed to commemorate an historical event. Some idea of celebrating the close of the calendar half-century may have helped to determine the choice of 1851 as the year for holding the first London fair; but if so, it was only with reference to the general progress during this period, and not to any notable fact at its commencement. Still less did the later exhibitions owe any portion of their significance and interest to their connection with a date. They afforded occasion for comparison and rivalry, but no shape loomed up out of the past claiming to preside over the festival, to have its toils and achievements remembered, and to be credited with a share in the production of the harvests garnered by its successors.

In our case it is very different. Here was the birth-year of the Union coming apace. It forced itself upon our contemplation. It appealed not merely to the average passion of grown-up boys for hurrahs, gun-firing, bell-ringing, and rockets sulphureous and oratorical. It addressed us in a much more sober tone and assumed a far more didactic aspect. Looking from its throne of clouds o'er half the (New) World—and indeed, as we have shown, constructively over the Old as well—it summoned us to the wholesome moral exercise of pausing a moment in our rapid career to revert to first principles, moral, social and political, and to explore the germs of our marvelous material progress. Nor could we assume this office as exclusively for our own benefit. The rest of Christendom silently assigned it to the youngest born for the common good. Circumstances had placed in our hands the measuring-rod of Humanity's growth, and all stood willing to gather upon our soil for its application, so far as that could be made by the method devised and perfected within the past quarter of a century. It was here, a thousand leagues away from the scene of the first enterprise of the kind, that the culminating experiment was to be tried.

GIRARD AVENUE BRIDGE—ONE OF THE APPROACHES TO THE EXHIBITION GROUNDS.

To what point on a continent as broad as the Atlantic were they to come? The European fairs were hampered with no question of locality. That Austria should hold hers at Vienna, France at Paris, and Britain at London, were foregone conclusions. But the United States have a plurality of capitals, political, commercial, historical and State. Washington, measured by house-room and not by magnificent distances, was too small. New York, acting with characteristic haste, had already indulged in an exposition, and it lacked, moreover, the rich cluster of associations that might have hallowed its claims as the "commercial metropolis." Among the State capitals Boston alone had the needed historical eminence, but, besides the obvious drawback of its situation, its capacity and its commissariat resources, except for a host of disembodied intellects, must prove insufficient....