Lippincott's Magazine of Popular Literature and Science Volume 15, No. 89, May, 1875 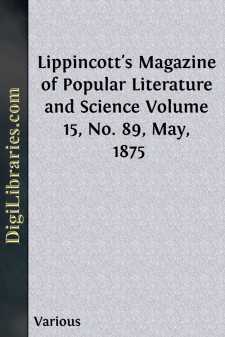 The lot of the foreigner in Buenos Ayres during the rainy season is not an enviable one. The Englishman who finds himself in that city when the rain falls for weeks at a time becomes a victim to the spleen, the American to "the blues," the Frenchman to ennui. The houses, built with a view mainly to protection against the torrid heats of summer, are not adapted to shelter their inmates from the dampness of winter, which penetrates through doors that do not fasten and windows that do not fit as snugly as they should. The continual and monotonous drip of the rain, which ripples in streams or falls drop by drop on the pavement of the yards or of the street, is also highly depressing to the spirits when one is held an involuntary prisoner in the ground-floors of the houses, and must perforce listen to it for hours.

If, led by inclination or compelled by necessity, you go into the street, you find the space between the sidewalks transformed into a miniature river. In some of the streets the pavements are more than three feet high, and pedestrians walk on them as on the tow-path of a canal, passing from one side of the torrent to the other on small wooden crossings. The comfort that is derived elsewhere in inclement weather from fires may not be hoped for in Buenos Ayres, for the bed-rooms are rarely provided with fireplaces, and in cases where they do possess them the chimneys are liable to smoke dreadfully when the north-west wind sweeps over the city.

The natives, accustomed to these features of the rainy season in La Plata, look with indifference on the forlorn condition of the stranger within their gates, and the foreigner, thus left to struggle against the coalition of the elements with the thoughtless or selfish indifference of the native population, must resign himself with patience and resignation until the three months of watery affliction shall have passed away.

It was at a time when the reign of Pluvius was at its height, and Buenos Ayres daily wept blinding tears, as it were, from every roof and gable for its sins, that M. X——, the head of a commercial house in the city, put a most welcome question to one of the attachés of the establishment, M. Forgues, a Frenchman, who just then was suffering from the grievous burden of ennui.

"See here," he said: "I want somebody to go up into Paraguay to collect an outstanding debt. Are you the man for my purpose?"

M. Forgues readily accepted the commission, for as the head of the house spoke a vision passed through his mind of Paraguay with its old Jesuit missions, its mysterious and despotic dictators, and its legends of the terrible war waged by Lopez against Brazil, the Argentine Confederation and the Banda Oriental. And, moreover, the venture promised relief from the horrors of the rainy season in Buenos Ayres.

When Francisco Solano Lopez, late president of Paraguay, fell on the field on March 1, 1870, at the head of a few hundred followers, the survivors of that courageous army of sixty thousand men with which in 1865 he had begun his five years' struggle, he had left behind him a devastated country, a decimated people and an impoverished population. It is to this land, almost remote enough from the pathway of our modern civilization to partake of the mystery of an unknown interior; where Nature has lavished her beauties with open hand; where a brilliant vegetation alternates with noble forests, solitudes that have rarely echoed the footfall of civilized man, and vast plains dotted with palms—a country of mountainous reaches in which the jaguar roams at will, of great lagoons, the home of a primitive race dwelling for the most part in villages,—to this land it is that we shall follow M. Forgues on his journey of more than a thousand miles, and see with his eyes its life and scenery.

From Buenos Ayres the traveler, issuing from the Rio de la Plata, ascends the Parana by steamer to Asuncion, the capital of Paraguay; and on the morning after the conversation with his principal M....