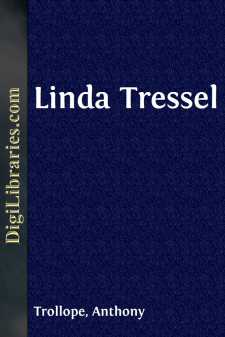 The troubles and sorrows of Linda Tressel, who is the heroine of the little story now about to be told, arose from the too rigid virtue of her nearest and most loving friend,—as troubles will sometimes come from rigid virtue when rigid virtue is not accompanied by sound sense, and especially when it knows little or nothing of the softness of mercy.

The nearest and dearest friend of Linda Tressel was her aunt, the widow Staubach—Madame Charlotte Staubach, as she had come to be called in the little town of Nuremberg where she lived. In Nuremberg all houses are picturesque, but you shall go through the entire city and find no more picturesque abode than the small red house with the three gables close down by the river-side in the Schütt island—the little island made by the river Pegnitz in the middle of the town. They who have seen the widow Staubach's house will have remembered it, not only because of its bright colour and its sharp gables, but also because of the garden which runs between the house and the water's edge. And yet the garden was no bigger than may often nowadays be seen in the balconies of the mansions of Paris and of London. Here Linda Tressel lived with her aunt, and here also Linda had been born.

Linda was the orphan of Herr Tressel, who had for many years been what we may call town-clerk to the magistrates of Nuremberg. Chance in middle life had taken him to Cologne—a German city indeed, as was his own, but a city so far away from Nuremberg that its people and its manners were as strange to him as though he had gone beyond the reach of his own mother-tongue. But here he had married, and from Cologne had brought home his bride to the picturesque, red, gabled house by the water's side in his own city. His wife's only sister had also married, in her own town; and that sister was the virtuous but rigid aunt Charlotte, to live with whom had been the fate in life of Linda Tressel.

It need not be more than told in the fewest words that the town-clerk and the town-clerk's wife both died when Linda was but an infant, and that the husband of her aunt Charlotte died also. In Nuremberg there is no possession so much coveted and so dearly loved as that of the house in which the family lives. Herr Tressel had owned the house with the three gables, and so had his father before him, and to the father it had come from an uncle whose name had been different,—and to him from some other relative. But it was an old family property, and, like other houses in Nuremberg, was to be kept in the hands of the family while the family might remain, unless some terrible ruin should supervene.

When Linda was but six years old, her aunt, the widow, came to Nuremberg to inhabit the house which the Tressels had left as an only legacy to their daughter; but it was understood when she did so that a right of living in the house for the remainder of her days was to belong to Madame Staubach because of the surrender she thus made of whatever of a home was then left to her in Cologne....