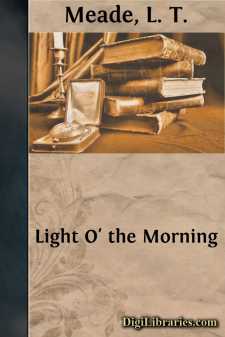 "You didn't see the masther going this way, miss?"

"What do you mean, Hannah? Father is never at home at this hour."

"I thought maybe—" said Hannah. She spoke in a dubious voice, backing a little away.

Hannah was a small, squat woman, of a truly Irish type. Her nose was celestial, her mouth wide, her eyes dark, and sparkling with fun. She was dressed in a short, coarse serge petticoat, with what is called a bedgown over it; the bedgown was made of striped calico, yellow and red, and was tied in at the waist with a broad band of the same. Hannah's hair was strongly inclined to gray, and her humorous face was covered with a perfect network of wrinkles. She showed a gleam of snowy teeth now, as she looked full at the young girl whom she was addressing.

Before Nora O'Shanaghgan could utter a word Hannah had turned on her heel.

"Come back, Hannah," said Nora in an imperious voice.

"Presently, darlint; it's the childer I hear calling me. Coming,Mike asthore, coming."

The squat little figure flew down a side walk which led to a paddock: beyond the paddock was a turnstile, and at the farther end of an adjacent field a cabin made of mud, with one tiny window and a thatched roof. Hannah was making for the cabin with rapid, waddling strides. Nora stood in the middle of the broad sweep which led up to the front door of the old house.

Castle O'Shanaghgan was a typical Irish home of the ancient régime. The house, a great square pile, was roomy and spacious; it had innumerable staircases, and long passages through which the wind shrieked on stormy nights, and a great castellated tower at its north end. This tower was in ruins, and had been given up a long time ago to the exclusive tenancy of the bats, the owls, and rats so large and fierce that the very dogs were afraid of them. In the tower at night the neighbors affirmed that they heard shrieks and ghostly noises; and Nora, whose bedroom was nearest to it, rejoiced much in the distinction of having twice heard the O'Shanaghgan Banshee keening outside her window. Nora was a slender, tall, and very graceful girl of about seventeen, and her face was as typical of the true, somewhat wild, Irish beauty as Hannah Croneen's was the reverse.

In the southwest of Ireland there are traces of Spanish as well as Celtic blood in many of its women; and Nora's quantities of thick, soft, intensely black hair must have come to her from a Spanish ancestor. So also did the delicately marked black brows and the black lashes to her dark and very lovely blue eyes; but the clear complexion, the cheeks with the tenderest bloom on them, the softly dimpled lips red as coral, and the little teeth white as pearls were true Irish characteristics.

Nora waited for a moment after Hannah had left her, then, shading her eyes from the westerly sun by one hand, she turned slowly and went into the house.

"Where is mother, Pegeen?" she said to a rough-looking, somewhat slatternly servant who was crossing the hall....