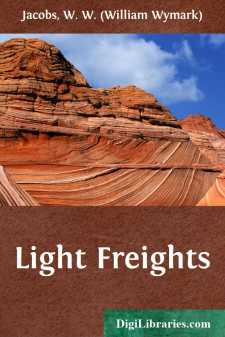 "Speaking o' money," said the night-watchman thoughtfully, as he selected an empty soapbox on the wharf for a seat, "the whole world would be different if we all 'ad more of it. It would be a brighter and a 'appier place for everybody."

He broke off to open a small brass tobacco-box and place a little quid of tobacco tenderly into a pouch in his left cheek, critically observing at the same time the efforts of a somewhat large steamer to get alongside the next wharf without blocking up more than three parts of the river. He watched it as though the entire operation depended upon his attention, and, the steamer fast, he turned his eyes back again and resumed his theme.

"Of course it's the being short that sharpens people," he admitted thoughtfully; "the sharpest man I ever knew never 'ad a ha'penny in 'is pocket, and the ways 'e had o' getting other chaps to pay for 'is beer would ha' made 'is fortin at the law if 'e'd only 'ad the eddication. Playful little chap 'e was. I've seen men wot didn't know 'im stand 'im a pot o' beer and then foller 'im up the road to see 'im knock down a policeman as 'e'd promised. They'd foller 'im to the fust policeman 'e met, an' then 'e'd point them out and say they were goin' to half kill 'im, an' the policeman 'ud just stroll up an' ask 'em wot they were 'anging about for, but I never 'eard of a chap telling 'im. They used to go away struck all of a 'eap. He died in the accident ward of the London Horse-pittle, poor chap."

He shook his head thoughtfully, and ignoring the statement of a watchman at the next wharf that it was a fine evening, shifted his quid and laughed rumblingly.

"The funniest way o' raising the wind I ever 'eard of," he said in explanation, "was one that 'appened about fifteen years ago. I'd just taken my discharge as A.B. from the North Star, trading between here and the Australian ports, and the men wot the thing 'appened to was shipmates o' mine, although on'y firemen.

"I knows it's a true story, becos I was in it a little bit myself, and the other part I 'ad from all of 'em, and besides, they didn't see anything funny in it at all, or anything out of the way. It seemed to them quite a easy way o' making money, and I dessay if it 'ad come off all right I should have thought so too.

"In about a week arter we was paid off at the Albert Docks these chaps was all cleaned out, and they was all in despair, with a thirst wot wasn't half quenched and a spree wot was on'y in a manner o' speaking just begun, and at the end of that time they came round to a room wot I 'ad, to see wot could be done. There was four of 'em in all: old Sam Small, Ginger Dick, Peter Russet, and a orphan nevy of Sam's whose father and mother was dead. The mother 'ad been 'alf nigger an' 'alf Malay when she was living, and Sam was always pertickler careful to point out that his nevy took arter 'er. It was enough to make the pore woman turn in 'er grave to say so, but Sam used to say that 'e owed it to 'is brother to explain.

"'Wot's to be done?' ses Peter Russet, arter they'd all said wot miserable chaps they was, an' 'ow badly sailor-men was paid....