Life of Tecumseh, and of His Brother the Prophet With a Historical Sketch of the Shawanoe Indians 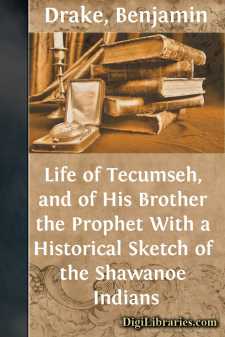 There is a tradition among the Shawanoes, in regard to their origin, which is said to be peculiar to that tribe. While most of the aborigines of this country believe that their respective races came out of holes in the earth at different places on this continent, the Shawanoes alone claim, that their ancestors once inhabited a foreign land; but having determined to leave it, they assembled their people and marched to the sea shore. Here, under the guidance of a leader of the Turtle tribe, one of their twelve original subdivisions, they walked into the sea, the waters of which immediately parted, and they passed in safety along the bottom of the ocean, until they reached this island.

The Shawanoes have been known by different names. The Iroquois, according to Colden's history of the "Five Nations," gave them the appellation of Satanas. The Delawares, says Gallatin, in his synopsis of the Indian tribes, call them Shawaneu, which means southern. The French writers mention them under the name of Chaouanons; and occasionally they are denominated Massawomees.

The orthography of the word by which they are generally designated, is not very well settled. It has been written Shawanos, Sawanos, Shawaneu, Shawnees and Shawanoes, which last method of spelling the word, will be followed in the pages of this work.

The original seats of the Shawanoes have been placed in different sections of the country. This has doubtless been owing to their very erratic disposition. Of their history, prior to the year 1680, but little is known. The earliest mention of them by any writer whose work has fallen under our observation, was in the beginning of the seventeenth century. Mr. Jefferson, in his "Notes on Virginia," says that when captain John Smith first arrived in America a fierce war was raging against the allied Mohicans, residing on Long Island, and the Shawanoes on the Susquehanna, and to the westward of that river, by the Iroquois. Captain Smith first landed on this continent in April, 1607. In the following year, 1608, he penetrated down the Susquehanna to the mouth of it, where he met six or seven of their canoes, filled with warriors, about to attack their enemy in the rear. De Laet, in 1632, in his enumeration of the different tribes, on either side of the Delaware river, mentions the Shawanoes.—Charlevoix speaks of them under the name of Chaouanons, as neighbors and allies in 1672, of the Andastes, an Iroquois tribe, living south of the Senecas. Whether any of the Shawanoes were present at the treaty made in 1682, under the celebrated Kensington elm, between William Penn and the Indians, does not positively appear from any authorities before us; that such, however, was the fact, may be fairly inferred, from the circumstance that at a conference between the Indians and governor Keith, in 1722, the Shawanoes exhibited a copy of this treaty written on parchment.

To the succeeding one made at Philadelphia, in February, 1701, the Shawanoes were parties, being represented on that occasion, by their chiefs, Wopatha, Lemoytungh and Pemoyajagh. More than fifty years afterward, a manuscript copy of this treaty of commerce and friendship, was in the possession of the Shawanoes of Ohio, and was exhibited by them....