Life of Lord Byron, Vol. 5 With His Letters and Journals 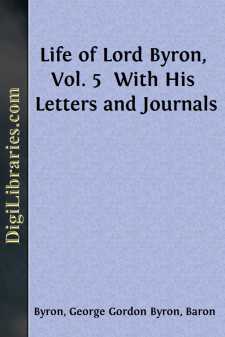 "You owe me two letters—pay them. I want to know what you are about. The summer is over, and you will be back to Paris. Apropos of Paris, it was not Sophia Gail, but Sophia Gay—the English word Gay—who was my correspondent. Can you tell who she is, as you did of the defunct * *?

"Have you gone on with your Poem? I have received the French of mine. Only think of being traduced into a foreign language in such an abominable travesty! It is useless to rail, but one can't help it.

"Have you got my Memoir copied? I have begun a continuation. Shall I send it you, as far as it is gone?

"I can't say any thing to you about Italy, for the Government here look upon me with a suspicious eye, as I am well informed. Pretty fellows!—as if I, a solitary stranger, could do any mischief. It is because I am fond of rifle and pistol shooting, I believe; for they took the alarm at the quantity of cartridges I consumed,—the wiseacres!

"You don't deserve a long letter—nor a letter at all—for your silence. You have got a new Bourbon, it seems, whom they have christened 'Dieu-donné;'—perhaps the honour of the present may be disputed. Did you write the good lines on ——, the Laker? * *

"The Queen has made a pretty theme for the journals. Was there ever such evidence published? Why, it is worse than 'Little's Poems' or 'Don Juan.' If you don't write soon, I will 'make you a speech.' Yours," &c.

"Pray forward the enclosed to Lady Byron. It is on business.

"In thanking you for the Abbot, I made four grand mistakes, Sir John Gordon was not of Gight, but of Bogagicht, and a son of Huntley's. He suffered not for his loyalty, but in an insurrection. He had nothing to do with Loch Leven, having been dead some time at the period of the Queen's confinement: and, fourthly, I am not sure that he was the Queen's paramour or no, for Robertson does not allude to this, though Walter Scott does, in the list he gives of her admirers (as unfortunate) at the close of 'The Abbot.'

"I must have made all these mistakes in recollecting my mother's account of the matter, although she was more accurate than I am, being precise upon points of genealogy, like all the aristocratical Scotch. She had a long list of ancestors, like Sir Lucius O'Trigger's, most of whom are to be found in the old Scotch Chronicles, Spalding, &c. in arms and doing mischief. I remember well passing Loch Leven, as well as the Queen's Ferry: we were on our way to England in 1798.

"You had better not publish Blackwood and the Roberts' prose, except what regards Pope;—you have let the time slip by."

The Pamphlet in answer to Blackwood's Magazine, here mentioned, was occasioned by an article in that work, entitled "Remarks on Don Juan," and though put to press by Mr. Murray, was never published. The writer in the Magazine having, in reference to certain passages in Don Juan, taken occasion to pass some severe strictures on the author's matrimonial conduct, Lord Byron, in his reply, enters at some length into that painful subject; and the following extracts from his defence,—if defence it can be called, where there has never yet been any definite charge,—will be perused with strong interest:—

"My learned brother proceeds to observe, that 'it is in vain for Lord B....