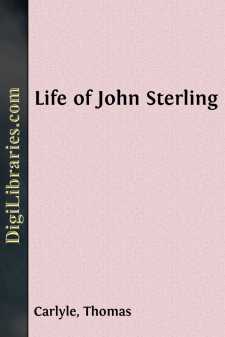 Near seven years ago, a short while before his death in 1844, John Sterling committed the care of his literary Character and printed Writings to two friends, Archdeacon Hare and myself. His estimate of the bequest was far from overweening; to few men could the small sum-total of his activities in this world seem more inconsiderable than, in those last solemn days, it did to him. He had burnt much; found much unworthy; looking steadfastly into the silent continents of Death and Eternity, a brave man's judgments about his own sorry work in the field of Time are not apt to be too lenient. But, in fine, here was some portion of his work which the world had already got hold of, and which he could not burn. This too, since it was not to be abolished and annihilated, but must still for some time live and act, he wished to be wisely settled, as the rest had been. And so it was left in charge to us, the survivors, to do for it what we judged fittest, if indeed doing nothing did not seem the fittest to us. This message, communicated after his decease, was naturally a sacred one to Mr. Hare and me.

After some consultation on it, and survey of the difficulties and delicate considerations involved in it, Archdeacon Hare and I agreed that the whole task, of selecting what Writings were to be reprinted, and of drawing up a Biography to introduce them, should be left to him alone; and done without interference of mine:—as accordingly it was, in a manner surely far superior to the common, in every good quality of editing; and visibly everywhere bearing testimony to the friendliness, the piety, perspicacity and other gifts and virtues of that eminent and amiable man.

In one respect, however, if in one only, the arrangement had been unfortunate. Archdeacon Hare, both by natural tendency and by his position as a Churchman, had been led, in editing a Work not free from ecclesiastical heresies, and especially in writing a Life very full of such, to dwell with preponderating emphasis on that part of his subject; by no means extenuating the fact, nor yet passing lightly over it (which a layman could have done) as needing no extenuation; but carefully searching into it, with the view of excusing and explaining it; dwelling on it, presenting all the documents of it, and as it were spreading it over the whole field of his delineation; as if religious heterodoxy had been the grand fact of Sterling's life, which even to the Archdeacon's mind it could by no means seem to be. Hinc illae lachrymae. For the Religious Newspapers, and Periodical Heresy-hunters, getting very lively in those years, were prompt to seize the cue; and have prosecuted and perhaps still prosecute it, in their sad way, to all lengths and breadths. John Sterling's character and writings, which had little business to be spoken of in any Church-court, have hereby been carried thither as if for an exclusive trial; and the mournfulest set of pleadings, out of which nothing but a misjudgment can be formed, prevail there ever since....