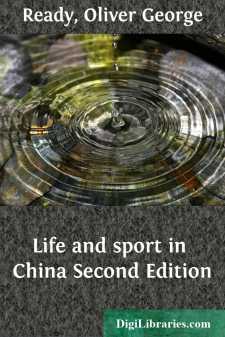 Anglo-Chinese life is a sealed book to most people at home, who, if they ever think about it at all, do so with minds adversely biassed by ignorance of the conditions, a hazy idea of intense heat, and a remembrance of cruel massacres.

"Going to China" always elicits looks and exclamations of astonishment at so rash an undertaking, but which the stock questions as to whether we eat with chopsticks, whether it is not always unbearably hot, and whether we like the Chinese, explain as disquietude arising from the idea of encountering "evils that we know not of."

Our early business relations with the Chinese were conducted at Canton, to which port opium in particular was shipped direct from India, but owing to the hostility of Chinese officials towards British merchants and the legitimate expansion of their trade, quarrels were frequent, culminating in the so-called Opium War of 1840-42, resulting in the acquisition by us of the small, barren island of Hongkong, and the opening to foreign trade of five ports, including Canton and Shanghai, at all of which small plots of land some half a mile square were set apart for the exclusive residence of foreigners generally but of Englishmen in particular. Disputes, however, did not cease, so that twenty years later England and France in co-operation, attacked China, and wrung from her the right of foreign ministers accredited to the Chinese court to reside at Peking, and also that additional ports should be opened to foreign trade, with a plot of land at each for residential purposes.

The treaties following on these two wars have since been supplemented by other treaties opening still more ports, at some of which also adjoining plots of land have likewise been conceded, and our position in China to-day is founded on the accumulated result of these various agreements, which, above all things, guarantee us exterritoriality or exemption from Chinese jurisdiction, so that Europeans for whatever misdemeanours, are amenable only to their own consuls.

There are now about thirty treaty-ports, most of them having these residential plots or concessions some of which, however, have never been taken up and built on, but where they have been, although leased from the Chinese Government at nominal rents, they are to all intents and purposes little detached portions of the British Empire, kept scrupulously clean and in perfect order, where natives are not allowed to dwell, but where Europeans of all nationalities live in security and comfort.

In each of them resides a British consul, who represents his Government vis-à-vis the Chinese and foreign officials, and who holds the position of magistrate in relation to his own nationals. An English doctor also is generally in practice at all, except the very smallest, ports.

In many instances walls have been built round these concessions, the gateways in which can be bolted and barred at night to keep out the natives, a good system of drainage introduced, wide roads laid out and lighted, public seats placed in pleasant spots facing the water, trees planted, palatial houses built with gardens attached, a church constructed, clubs founded, billiard-tables and other insignia of Western luxury imported, a municipal council elected for managing local affairs, and a force of native police or Indian Sikhs raised, with which, under English superintendents, to maintain order in our streets....