Life and Letters of Robert Browning 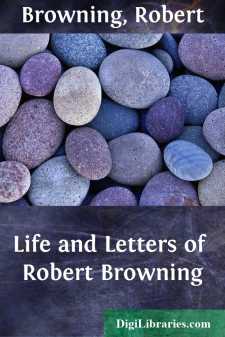 A belief was current in Mr. Browning's lifetime that he had Jewish blood in his veins. It received outward support from certain accidents of his life, from his known interest in the Hebrew language and literature, from his friendship for various members of the Jewish community in London. It might well have yielded to the fact of his never claiming the kinship, which could not have existed without his knowledge, and which, if he had known it, he would, by reason of these very sympathies, have been the last person to disavow. The results of more recent and more systematic inquiry have shown the belief to be unfounded.

Our poet sprang, on the father's side, from an obscure or, as family tradition asserts, a decayed branch, of an Anglo-Saxon stock settled, at an early period of our history, in the south, and probably also south-west, of England. A line of Brownings owned the manors of Melbury-Sampford and Melbury-Osmond, in north-west Dorsetshire; their last representative disappeared—or was believed to do so—in the time of Henry VII., their manors passing into the hands of the Earls of Ilchester, who still hold them.* The name occurs after 1542 in different parts of the country: in two cases with the affix of 'esquire', in two also, though not in both coincidently, within twenty miles of Pentridge, where the first distinct traces of the poet's family appear. Its cradle, as he called it, was Woodyates, in the parish of Pentridge, on the Wiltshire confines of Dorsetshire; and there his ancestors, of the third and fourth generations, held, as we understand, a modest but independent social position.

* I am indebted for these facts, as well as for some othersreferring to, or supplied by, Mr. Browning's uncles,to some notes made for the Browning Society by Dr. Furnivall.

This fragment of history, if we may so call it, accords better with our impression of Mr. Browning's genius than could any pedigree which more palpably connected him with the 'knightly' and 'squirely' families whose name he bore. It supplies the strong roots of English national life to which we instinctively refer it. Both the vivid originality of that genius and its healthy assimilative power stamp it as, in some sense, the product of virgin soil; and although the varied elements which entered into its growth were racial as well as cultural, and inherited as well as absorbed, the evidence of its strong natural or physical basis remains undisturbed.

Mr. Browning, for his own part, maintained a neutral attitude in the matter. He neither claimed nor disclaimed the more remote genealogical past which had presented itself as a certainty to some older members of his family....