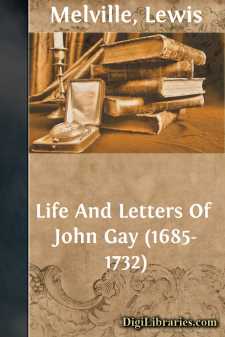 The Gays were an old family, who settled in Devonshire when Gilbert le Gay, through his marriage with the daughter and heiress of Curtoyse, came into possession of the manor of Goldsworthy, in Parkham. This they held until 1630, when it passed out of their hands to the Coffins. Subsequently they were associated with the parish of Frittelstock, near Great Torrington. In the Parish Registers of Barnstaple the name appears from time to time: in 1544 is recorded the death of Richard Gaye, and later of John Gaye, "gentill man," and Johans Gay. From other sources it is known that Richard Gay was Mayor of the town in 1533, and Anthony Gay in 1638. The records of the family have not been preserved, but at some time early in the seventeenth century there was at Frittelstock one John Gay, whose second son, William, was the father of the poet.

William Gay resided at Barnstaple, and since he lived in a large house, called the Red Cross, at the corner of Joy Street, facing Holland Street, it is reasonable to assume that he was in easy circumstances. He married a daughter of Jonathan Hanmer, the leading Nonconformist divine of the town, and by her had five children. The first-born was a girl, who died in 1685; then came Katherine, born [pg 2]in 1676, who married Anthony Baller, whose son Joseph issued in 1820 the slim volume bearing the title of "Gay's Chair";in 1778, Jonathan; and three years later, Joanna, who married John Fortescue—possibly a relation of William Fortescue, afterwards Master of the Rolls, who is still remembered as a friend of Pope. The youngest child was John, the subject of this memoir, stated by his earlier biographers to have been born in 1688, but now known, from an entry in the Barnstaple Parish Register, to have been baptised in the Old Church on September 16th, 1685.

Mrs. Gay died in 1694, her husband a year later; and the custody of the four surviving orphaned children devolved upon their uncles. William Gay's brothers were John and Richard, who resided at Frittelstock; James, Rector of Meeth; and Thomas, who lived at Barnstaple. Mrs. Gay's only brother was John Hanmer, who succeeded to his father's pastoral office among the Congregational or Independent Dissenters at Barnstaple. Jonathan, the elder son of William Gay, who inherited the family property, was intended for the Church, but "severe studies not well suiting his natural genius, he betook himself to military pursuits," and, probably about the time of his father's death, entered the army. Who took charge of the two girls is not known; but it is on record that John, after his father's death, and then in his tenth year, went to live at Barnstaple with his paternal uncle, Thomas Gay. It is interesting to note that in 1882, "among the pieces of timber carted away from the Barnstaple Parish Church [which was then undergoing restoration] has been found a portion of a pew, with the name 'John Gay,' and the date, 1695, cut upon it.... No other John Gay appears in the Parish Register."

Gay attended the Free Grammar School at Barnstaple, and among his schoolfellows there with whom he cemented [pg 3]an enduring friendship, were William Fortescue, to whom reference has been made above, and Aaron Hill. William Raynor was the headmaster when Gay first went to the Grammar School, but soon he removed to Tiverton, and was succeeded by the Rev....