Life and Death of John of Barneveld, Advocate of Holland : with a view of the primary causes and movements of the Thirty Years' War - Complete (1614-23) 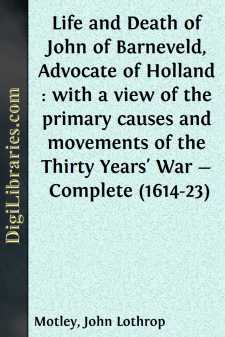 I have thus purposely sketched the leading features of a couple of momentous, although not eventful, years—so far as the foreign policy of the Republic is concerned—in order that the reader may better understand the bearings and the value of the Advocate's actions and writings at that period. This work aims at being a political study. I would attempt to exemplify the influence of individual humours and passions—some of them among the highest and others certainly the basest that agitate humanity-upon the march of great events, upon general historical results at certain epochs, and upon the destiny of eminent personages. It may also be not uninteresting to venture a glance into the internal structure and workings of a republican and federal system of government, then for the first time reproduced almost spontaneously upon an extended scale.

Perhaps the revelation of some of its defects, in spite of the faculty and vitality struggling against them, may not be without value for our own country and epoch. The system of Switzerland was too limited and homely, that of Venice too purely oligarchical, to have much moral for us now, or to render a study of their pathological phenomena especially instructive. The lessons taught us by the history of the Netherland confederacy may have more permanent meaning.

Moreover, the character of a very considerable statesman at an all-important epoch, and in a position of vast responsibility, is always an historical possession of value to mankind. That of him who furnishes the chief theme for these pages has been either overlooked and neglected or perhaps misunderstood by posterity. History has not too many really important and emblematic men on its records to dispense with the memory of Barneveld, and the writer therefore makes no apology for dilating somewhat fully upon his lifework by means of much of his entirely unpublished and long forgotten utterances.

The Advocate had ceaselessly been sounding the alarm in Germany. For the Protestant Union, fascinated, as it were, by the threatening look of the Catholic League, seemed relapsing into a drowse.

"I believe," he said to one of his agents in that country, "that the Evangelical electors and princes and the other estates are not alive to the danger. I am sure that it is not apprehended in Great Britain. France is threatened with troubles. These are the means to subjugate the religion, the laws and liberties of Germany. Without an army the troops now on foot in Italy cannot be kept out of Germany. Yet we do not hear that the Evangelicals are making provision of troops, money, or any other necessaries. In this country we have about one hundred places occupied with our troops, among whom are many who could destroy a whole army. But the maintenance of these places prevents our being very strong in the field, especially outside our frontiers. But if in all Germany there be many places held by the Evangelicals which would disperse a great army is very doubtful. Keep a watchful eye. Economy is a good thing, but the protection of a country and its inhabitants must be laid to heart. Watch well if against these Provinces, and against Bohemia, Austria, and other as it is pretended rebellious states, these plans are not directed. Look out for the movements of the Italian and Bavarian troops against Germany. You see how they are nursing the troubles and misunderstandings in France, and turning them to account."

He instructed the new ambassador in Paris to urge upon the French government the absolute necessity of punctuality in furnishing the payment of their contingent in the Netherlands according to convention. The States of Holland themselves had advanced the money during three years' past, but this anticipation was becoming very onerous. It was necessary to pay the troops every month regularly, but the funds from Paris were always in arrear....