Life and Death of John of Barneveld, Advocate of Holland : with a view of the primary causes and movements of the Thirty Years' War - Complete (1609-15) 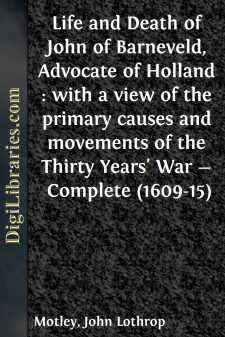 These volumes make a separate work in themselves. They form also the natural sequel to the other histories already published by the Author, as well as the necessary introduction to that concluding portion of his labours which he has always desired to lay before the public; a History of the Thirty Years' War.

For the two great wars which successively established the independence of Holland and the disintegration of Germany are in reality but one; a prolonged Tragedy of Eighty Years. The brief pause, which in the Netherlands was known as the Twelve Years' Truce with Spain, was precisely the epoch in which the elements were slowly and certainly gathering for the renewal over nearly the whole surface of civilized Europe of that immense conflict which for more than forty years had been raging within the narrow precincts of the Netherlands.

The causes and character of the two wars were essentially the same. There were many changes of persons and of scenery during a struggle which lasted for nearly three generations of mankind; yet a natural succession both of actors, motives, and events will be observed from the beginning to the close.

The designs of Charles V. to establish universal monarchy, which he had passionately followed for a lifetime through a series of colossal crimes against humanity and of private misdeeds against individuals, such as it has rarely been permitted to a single despot to perpetrate, had been baffled at last. Disappointed, broken, but even to our own generation never completely unveiled, the tyrant had withdrawn from the stage of human affairs, leaving his son to carry on the great conspiracy against Human Right, independence of nations, liberty of thought, and equality of religions, with the additional vigour which sprang from intensity of conviction.

For Philip possessed at least that superiority over his father that he was a sincere bigot. In the narrow and gloomy depths of his soul he had doubtless persuaded himself that it was necessary for the redemption of the human species that the empire of the world should be vested in his hands, that Protestantism in all its forms should be extirpated as a malignant disease, and that to behead, torture, burn alive, and bury alive all heretics who opposed the decree of himself and the Holy Church was the highest virtue by which he could merit Heaven.

The father would have permitted Protestantism if Protestantism would have submitted to universal monarchy. There would have been small difficulty in the early part of his reign in effecting a compromise between Rome and Augsburg, had the gigantic secular ambition of Charles not preferred to weaken the Church and to convert conscientious religious reform into political mutiny; a crime against him who claimed the sovereignty of Christendom.

The materials for the true history of that reign lie in the Archives of Spain, Austria, Rome, Venice, and the Netherlands, and in many other places. When out of them one day a complete and authentic narrative shall have been constructed, it will be seen how completely the policy of Charles foreshadowed and necessitated that of Philip, how logically, under the successors of Philip, the Austrian dream of universal empire ended in the shattering, in the minute subdivision, and the reduction to a long impotence of that Germanic Empire which had really belonged to Charles....