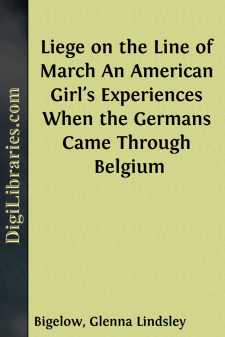 Liége on the Line of March, or An American Girl's Experience When the Germans Came Through Belgium, is a unique story. No other American probably was in the exact position of Miss Bigelow who was at the Château d'Angleur, Liége, Belgium, with the family of Monsieur X. at the outbreak of the war and experienced with them and the people of their country those tragic events which, up to the present, have hardly even been sketched for the world.

What the public already knows of armies, guns, trenches, etc., has little to do with the suffering that the people of an invaded country endures, when the white-hot flame of the enemy invasion sweeps over the land scorching every flower and leaving in its wake only desolation and pain and despair. This narrative describes in detail just what might come to any one of its readers if the Germans were victorious in Europe. Let him picture to himself his line of action or even his line of thought if an insolent officer came into his home, took his paintings from the wall, his rugs from the floor, his private papers from his desk and, finally, his sons to—what fate? The most pacific of pacifists would draw a tight breath at such proceedings. And these are the least of things that have happened in Belgium.

But the journal was not written with exhortative design. It is the simple and truthful story of daily events as they occurred; if, at times, the words seem brutal, the circumstances were brutal. Why should one not know them?

The Château d'Angleur was respected as far as real pillaging and destroying were concerned for the fact that a cousin of Monsieur X., a Belgian by birth, is the wife of the Count von M. of Germany, at one time Grand Chancellor of the Imperial Court and a trusted friend of Emperor William the Second. As was proven afterwards this relationship, surprisingly enough, had some influence on the side of clemency.

Monsieur X. was one of that family of famous Belgian bankers which has existed for four generations. He was also President of the International Sleeping Car Company of Europe to which honor he was appointed at the death of his brother Monsieur Georges X., the originator and founder of the Company.

Madame X. is a Russian by birth, the great-granddaughter of Prince ——, who was at one time Grand Chancellor of the Court of Russia, and a cousin of Princess ——, a lady in waiting to Her Former Majesty the Czarina of Russia. The daughter of Madame X., Baronne de H., wife of a Belgian nobleman of Brussels, is a personal friend of Their Majesties, the King and Queen of Belgium.

Miss Bigelow, though a neutral subject, was nevertheless a virtual prisoner of the Germans from August to November, 1914, owing to the lack of facility in getting away from Belgium. The railroad was taken over entirely by the German Army; automobiles, horses, carriages, etc., being long since confiscated and appropriated by the Germans. Considerable anxiety was felt as to her safety as no communication with the outside world was possible during those three months of internment....