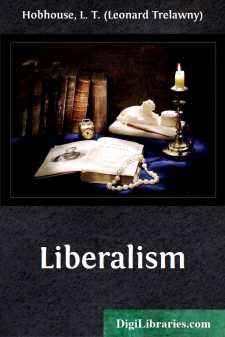 The modern State is the distinctive product of a unique civilization. But it is a product which is still in the making, and a part of the process is a struggle between new and old principles of social order. To understand the new, which is our main purpose, we must first cast a glance at the old. We must understand what the social structure was, which—mainly, as I shall show, under the inspiration of Liberal ideas—is slowly but surely giving place to the new fabric of the civic State. The older structure itself was by no means primitive. What is truly primitive is very hard to say. But one thing is pretty clear. At all times men have lived in societies, and ties of kinship and of simple neighbourhood underlie every form of social organization. In the simplest societies it seems probable that these ties—reinforced and extended, perhaps, by religious or other beliefs—are the only ones that seriously count. It is certain that of the warp of descent and the woof of intermarriage there is woven a tissue out of which small and rude but close and compact communities are formed. But the ties of kinship and neighbourhood are effective only within narrow limits. While the local group, the clan, or the village community are often the centres of vigorous life, the larger aggregate of the Tribe seldom attains true social and political unity unless it rests upon a military organization. But military organization may serve not only to hold one tribe together but also to hold other tribes in subjection, and thereby, at the cost of much that is most valuable in primitive life, to establish a larger and at the same time a more orderly society. Such an order once established does not, indeed, rest on naked force. The rulers become invested with a sacrosanct authority. It may be that they are gods or descendants of gods. It may be that they are blessed and upheld by an independent priesthood. In either case the powers that be extend their sway not merely over the bodies but over the minds of men. They are ordained of God because they arrange the ordination. Such a government is not necessarily abhorrent to the people nor indifferent to them. But it is essentially government from above. So far as it affects the life of the people at all, it does so by imposing on them duties, as of military service, tribute, ordinances, and even new laws, in such wise and on such principles as seem good to itself. It is not true, as a certain school of jurisprudence held, that law is, as such, a command imposed by a superior upon an inferior, and backed by the sanctions of punishment. But though this is not true of law in general it is a roughly true description of law in that particular stage of society which we may conveniently describe as the Authoritarian.

Now, in the greater part of the world and throughout the greater part of history the two forms of social organization that have been distinguished are the only forms to be found. Of course, they themselves admit of every possible variation of detail, but looking below these variations we find the two recurrent types....