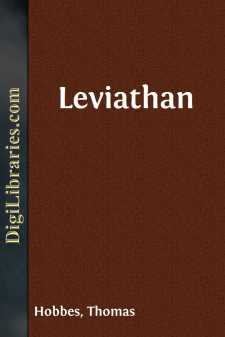 CHAPTER I. OF SENSE

Concerning the Thoughts of man, I will consider them first Singly, and afterwards in Trayne, or dependance upon one another. Singly, they are every one a Representation or Apparence, of some quality, or other Accident of a body without us; which is commonly called an Object. Which Object worketh on the Eyes, Eares, and other parts of mans body; and by diversity of working, produceth diversity of Apparences.

The Originall of them all, is that which we call Sense; (For there is no conception in a mans mind, which hath not at first, totally, or by parts, been begotten upon the organs of Sense.) The rest are derived from that originall.

To know the naturall cause of Sense, is not very necessary to the business now in hand; and I have els-where written of the same at large. Nevertheless, to fill each part of my present method, I will briefly deliver the same in this place.

The cause of Sense, is the Externall Body, or Object, which presseth the organ proper to each Sense, either immediatly, as in the Tast and Touch; or mediately, as in Seeing, Hearing, and Smelling: which pressure, by the mediation of Nerves, and other strings, and membranes of the body, continued inwards to the Brain, and Heart, causeth there a resistance, or counter-pressure, or endeavour of the heart, to deliver it self: which endeavour because Outward, seemeth to be some matter without. And this Seeming, or Fancy, is that which men call sense; and consisteth, as to the Eye, in a Light, or Colour Figured; To the Eare, in a Sound; To the Nostrill, in an Odour; To the Tongue and Palat, in a Savour; and to the rest of the body, in Heat, Cold, Hardnesse, Softnesse, and such other qualities, as we discern by Feeling. All which qualities called Sensible, are in the object that causeth them, but so many several motions of the matter, by which it presseth our organs diversly. Neither in us that are pressed, are they anything els, but divers motions; (for motion, produceth nothing but motion.) But their apparence to us is Fancy, the same waking, that dreaming. And as pressing, rubbing, or striking the Eye, makes us fancy a light; and pressing the Eare, produceth a dinne; so do the bodies also we see, or hear, produce the same by their strong, though unobserved action, For if those Colours, and Sounds, were in the Bodies, or Objects that cause them, they could not bee severed from them, as by glasses, and in Ecchoes by reflection, wee see they are; where we know the thing we see, is in one place; the apparence, in another. And though at some certain distance, the reall, and very object seem invested with the fancy it begets in us; Yet still the object is one thing, the image or fancy is another. So that Sense in all cases, is nothing els but originall fancy, caused (as I have said) by the pressure, that is, by the motion, of externall things upon our Eyes, Eares, and other organs thereunto ordained.

But the Philosophy-schooles, through all the Universities of Christendome, grounded upon certain Texts of Aristotle, teach another doctrine; and say, For the cause of Vision, that the thing seen, sendeth forth on every side a Visible Species(in English) a Visible Shew, Apparition, or Aspect, or a Being Seen; the receiving whereof into the Eye, is Seeing....