Letters to his mother, Ann Borrow and Other Correspondents 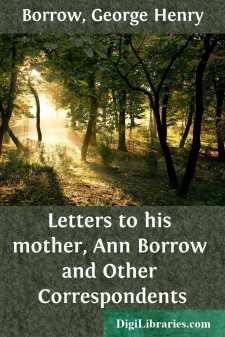 Many thanks for your interesting and kind letter, in which you do me the honour to ask my opinion respecting the pedigree of your island goblin, le feu follet Belenger; that opinion I cheerfully give, with a promise that it is only an opinion; in hunting for the etymons of these fairy names we can scarcely expect to arrive at any thing like certainty.

I suppose you are aware that the name of Bilenger, or Billinger, is of occasional though by no means frequent occurrence both in England and France.  You have heard of Billings-gate, and of Billing-ham, the unfortunate assassin of poor Percival.  Likewise of Billing-ton, all modifications of the same root: Belingart, Bilings-home or Billing-ston.  But what is Billinger?  Clearly that which is connected some way or other with Billing.  You will find ger, or something like it, in most European tongues—Boulanger, horologer, talker walker, baker, brewer, beggar.  In Welsh it is of frequent occurrence in the shape of ur or gwr—hinur (an elder), herwr (a prowler); in Russian the ger, gwr, ur, er, appears in the shape of ik or k—Sapojgnik, a shoemaker, Chinobuik, a man possessed of rank.  The root of all these, as well as of or in Senator, victor, etc., is the same as ker or kir; which means, Lord, master, maker, doer, possessor of something or connected with something.

We want now to come at the meaning of Beling or Billing, which probably means some action, or some moral or personal attribute.  Bolvile in Anglo-Saxon means honest, Danish Bollig; Wallen, in German, to wanken or move restlessly about; Baylan, in Spanish, to dance, connected with which are to whirl, to fling, and possibly Walloon and Fleming.

Belenger therefore may mean a Billiger or honest fellow, or it may mean a Walter-ger, a whirlenger, a flinger or something connected with restless motion.

Allow me to draw your attention to the word “Will” in the English word “Will of the wisp.”   It must not be supposed that this “Will” is the abbreviation of William; it is pure Danish, “Vild,” pronounced “will,” and signifies wild, “Vilden Visk; Vilden Visk,” the wild or moving wisp.  I can adduce another instance of the corruption of the Danish “vild” into “will.”  The rustics of this part of England are in the habit of saying “they are led will” (vild or wild), when from intoxication or some other cause they are bewildered at night and cannot find their way home.  This expression is clearly from the old Norse or Danish.  I am not at all certain that “Bil” in Bilinger may not be this same “will” or “Vild,” and that the word may not be a corruption of Vilden, old or elder, wild or flying fire.

It has likewise occurred to me that Bilinger may be derived from “Volundr,” the worship of the blacksmith or Northern Vulcan.

I am about to leave Constantinople and to return home.  I have given up the idea of going to Russia.  I find that if I go to Odessa I shall have to remain in quarantine for fourteen days, which I have no inclination to do; I am moreover anxious to get home, being quite tired of wandering, and desirous of being once more with my loved ones....