Letters to His Children 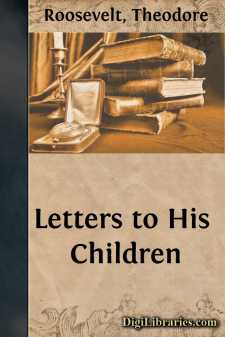 Most of the letters in this volume were written by Theodore Roosevelt to his children during a period of more than twenty years. A few others are included that he wrote to friends or relatives about the children. He began to write to them in their early childhood, and continued to do so regularly till they reached maturity. Whenever he was separated from them, in the Spanish War, or on a hunting trip, or because they were at school, he sent them these messages of constant thought and love, for they were never for a moment out of his mind and heart. Long before they were able to read he sent them what they called "picture letters," with crude drawings of his own in illustration of the written text, drawings precisely adapted to the childish imagination and intelligence. That the little recipients cherished these delightful missives is shown by the tender care with which they preserved them from destruction. They are in good condition after many years of loving usage. A few of them are reproduced in these pages—written at different periods as each new child appeared in the household.

These early letters are marked by the same quality that distinguishes all his letters to his children. From the youngest to the eldest, he wrote to them always as his equals. As they advanced in life the mental level of intercourse was raised as they grew in intelligence and knowledge, but it was always as equals that he addressed them. He was always their playmate and boon companion, whether they were toddling infants taking their first faltering steps, or growing schoolboys, or youths standing at the threshold of life. Their games were his games, their joys those of his own heart. He was ready to romp with them in the old barn at Sagamore Hill, play "tickley" at bedtime, join in their pillow fights, or play hide-and-seek with them, either at Sagamore Hill or in the White House. He was the same chosen and joyous companion always and everywhere. Occasionally he was disturbed for a moment about possible injury to his Presidential dignity. Describing a romp in the old barn at Sagamore Hill in the summer of 1903, he said in one of his letters that under the insistence of the children he had joined in it because: "I had not the heart to refuse, but really it seems, to put it mildly, rather odd for a stout, elderly President to be bouncing over hayricks in a wild effort to get to goal before an active midget of a competitor, aged nine years. However, it was really great fun."

It was because he at heart regarded it as "great fun" and was in complete accord with the children that they delighted in him as a playmate. In the same spirit, in January, 1905, he took a squad of nine boys, including three of his own, on what they called a "scramble" through Rock Creek Park, in Washington, which meant traversing the most difficult places in it. The boys had permission to make the trip alone, but they insisted upon his company. "I am really touched," he wrote afterward to the parents of two of the visiting boys, "at the way in which your children as well as my own treat me as a friend and playmate....