Letters to Helen Impressions of an Artist on the Western Front 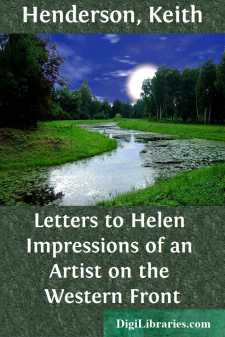 Well, here we are in the slowest train that ever limped, and I've been to sleep for seven hours. The first good sleep since leaving England. And now, as we've got twenty-eight hours to go still, there's time to write a letter. The last three days' postcards have been scrappy and unintelligible, but we departed without warning and with the most Sherlock Holmes secrecy. Not a word about which ports we were sailing from or to.

However, I'll tell you what I can without disclosing any names of places.

After moving off at midnight from among the Hampshire pine-trees, we eventually reached our port of departure. Great fun detraining the horses and getting them on board. The men were in the highest spirits. But how disgusting those cold rank smells of a dock are.

We sailed the following evening. Hideously rough, and it took seventeen and a half hours. The men very quiet indeed and packed like sardines. It was wonderful to think of all those eager souls in all those ships making for France together over the black deep water. Some had gone before, and some came after. But the majority went over that night. I felt decidedly ill. And it was nervous work going round seeing after the horses and men when a "crisis" might have occurred at any moment! Luckily, however, dignity was preserved. Land at last "hove in sight" as the grey morning grew paler and clearer. What busy-looking quays! More clatter of disembarkation. No time to think or look about.

Then, all being ready, we mounted and trekked off to a so-called "rest camp" near the town, most uneasy and hectic. But food late that evening restored our hilarity. A few hours' sleep and we moved off once more into the night, the horses' feet sounding loud and harsh on the unending French cobbles. By 8 a.m. we were all packed into this train. Now we are passing by lovely, almost English, wooded hills. Here a well-known town with its cathedral looks most enticing. I long to explore. Such singing from the men's carriages! Being farmers mostly, they are interested in the unhedged fields and the acres of cloches. They go into hysterics of laughter when the French people assail them with smiles, broken English-French, and long loaves of bread. They think the long loaves very humorous! There are Y.M.C.A. canteens at most stations, so we are well fed. The horses are miserable, of course. They were unhappy on board ship. A horse can't be sick, you know, even if he wants to. And now they are wretched in their trucks, Rinaldo and Swallow are, of course, terrified, while Jezebel, having rapidly thought out the situation, takes it all very quietly. She has just eaten an enormous lunch. Poor Rinaldo wouldn't touch his, and Swallow only ate a very little.

In this carriage Jorrocks is snoring like thunder. Edward is eating chocolate. Sir John is trying to plough through one of "these Frenchy newspapers—damned nonsense, you know! they don't know what it all means themselves." And Julian is scrutinizing a map of our area....