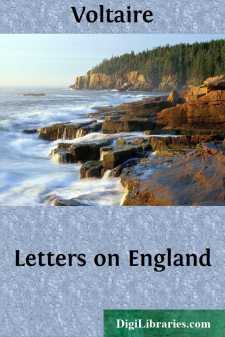 François Marie Arouet, who called himself Voltaire, was the son of François Arouet of Poitou, who lived in Paris, had given up his office of notary two years before the birth of this his third son, and obtained some years afterwards a treasurer’s office in the Chambre des Comptes.  Voltaire was born in the year 1694.  He lived until within ten or eleven years of the outbreak of the Great French Revolution, and was a chief leader in the movement of thought that preceded the Revolution.  Though he lived to his eighty-fourth year, Voltaire was born with a weak body.  His brother Armand, eight years his senior, became a Jansenist.  Voltaire when ten years old was placed with the Jesuits in the Collège Louis-le-Grand.  There he was taught during seven years, and his genius was encouraged in its bent for literature; skill in speaking and in writing being especially fostered in the system of education which the Jesuits had planned to produce capable men who by voice and pen could give a reason for the faith they held.  Verses written for an invalid soldier at the age of eleven won for young Voltaire the friendship of Ninon l’Enclos, who encouraged him to go on writing verses.  She died soon afterwards, and remembered him with a legacy of two thousand livres for purchase of books.  He wrote in his lively school-days a tragedy that afterwards he burnt.  At the age of seventeen he left the Collège Louis-le-Grand, where he said afterwards that he had been taught nothing but Latin and the Stupidities.  He was then sent to the law schools, and saw life in Paris as a gay young poet who, with all his brilliant liveliness, had an aptitude for looking on the tragic side of things, and one of whose first poems was an “Ode on the Misfortunes of Life.”  His mother died when he was twenty.  Voltaire’s father thought him a fool for his versifying, and attached him as secretary to the Marquis of Châteauneuf; when he went as ambassador to the Hague.  In December, 1713, he was dismissed for his irregularities.  In Paris his unsteadiness and his addiction to literature caused his father to rejoice in getting him housed in a country château with M. de Caumartin.  M. de Caumartin’s father talked with such enthusiasm of Henri IV. and Sully that Voltaire planned the writing of what became his Henriade, and his “History of the Age of Louis XIV.,” who died on the 1st of September, 1715.

Under the regency that followed, Voltaire got into trouble again and again through the sharpness of his pen, and at last, accused of verse that satirised the Regent, he was locked up—on the 17th of May, 1717—in the Bastille.  There he wrote the first two books of his Henriade, and finished a play on Œdipus, which he had begun at the age of eighteen.  He did not obtain full liberty until the 12th of April, 1718, and it was at this time—with a clearly formed design to associate the name he took with work of high attempt in literature—that François Marie Arouet, aged twenty-four, first called himself Voltaire....