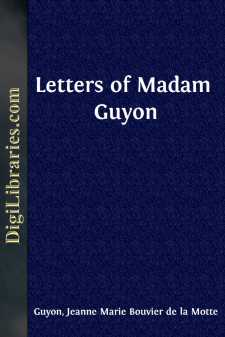 Madam Guyon's correspondence was very extensive, occupying five printed volumes. Her style of writing is somewhat diffuse. In giving religious advice to many persons, there would necessarily be frequent repetitions. It has, therefore, occurred to the writer, that a selection and re-arrangement of thoughts, such as is found in this little volume, would be more acceptable and useful, than a literal and full translation of her letters. This selection necessarily involved much re-writing and condensing. Great care, however, has been taken to reach her true sentiments, and to give a just relation of her religious experience.

In the interesting preface to her letters, published in 1767, the writer remarks: "Next to the Holy Scriptures, we do not believe there has been given to the world, any writings, so valuable as Madam Guyon's; and of all these precious treasures, her letters are the most rare. All who have received the unction of the Holy One, whereby they know the truth, are agreed upon her divine writings."

If the writer may be permitted to add her humble testimony, having enjoyed the privilege of reading her writings in the original for several years, she would say, there are no writings, excepting the Sacred Oracles, from which she has received so much spiritual benefit. It is on this account, she has endeavored, with divine assistance, to portray to others, Madam Guyon's deep religious feelings. May the same spirit of devotion to her Lord and Master which she possessed, rest upon the heart of the reader.

Happy are they in whose hearts burns the flame of divine love.

SKETCH OF HER LIFE.

Jeannie Marie Mothe, the maiden name of Madam Guyon, was born at Montargis, in France, April 13, 1648. She was married to M. J. Guyon, in 1664, and became the mother of four children. In July, 1676, she was separated from her husband by death. Madam Guyon was one of that number, who, in advance of the common standard of piety, are called to be Reformers; and on this account, she suffered great persecutions. She was several times imprisoned. At one time eight months; and subsequently four years in one of the towers of the celebrated Bastile. After her release from prison, she was banished for the remainder of her days to Blois, on the river Loire. At the time of her release from the Bastile, she was fifty-four years of age. Her sufferings from the cold, damp walls of the prison, in winter, and the confined air in summer, with other privations and hardships, greatly impaired her constitution, and rendered her a sufferer to the close of her days. She died June 9, 1717, aged sixty-nine years.

During her imprisonment, she wrote her Autobiography, which has been translated into English. Another work of hers, "The Torrents," has recently been translated, very happily, by Mr. Ford. Also two essays, "Method of Prayer," and "Concise View of the Way of God," by J. W. Metcalf. It is not known by the writer, that her other works have been translated, with the exception of some of her poems by William Cowper; and "The Life and Experience of Madam Guyon," in two volumes, written by my husband....