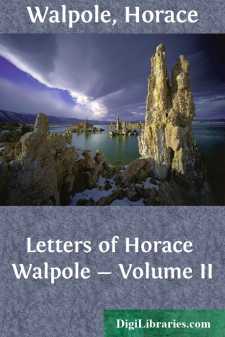 … My journey to Paris is fixed for some time in February, where I hear I may expect to find Madame de Boufflers, Princess of Conti. Her husband is just dead; and you know the House of Bourbon have an alacrity at marrying their old mistresses. She was here last year, being extremely infected with the Anglomanie, though I believe pretty well cured by her journey. She is past forty, and does not appear ever to have been handsome, but is one of the most agreeable and sensible women I ever saw; yet I must tell you a trait of her that will not prove my assertion. Lady Holland asked her how she liked Strawberry Hill? She owned that she did not approve of it, and that it was not digne de la solidité Angloise. It made me laugh for a quarter of an hour. They allot us a character we have not, and then draw consequences from that idea, which would be absurd, even if the idea were just. One must not build a Gothic house because the nation is solide. Perhaps, as everything now in France must be Гѓ  la Grecque, she would have liked a hovel if it pretended to be built after Epictetus's—but Heaven forbid that I should be taken for a philosopher! Is it not amazing that the most sensible people in France can never help being domineered by sounds and general ideas? Now everybody must be a géomètre, now a philosophe, and the moment they are either, they are to take up a character and advertise it: as if one could not study geometry for one's amusement or for its utility, but one must be a geometrician at table, or at a visit! So the moment it is settled at Paris that the English are solid, every Englishman must be wise, and, if he has a good understanding, he must not be allowed to play the fool. As I happen to like both sense and nonsense, and the latter better than what generally passes for the former, I shall disclaim, even at Paris, the profondeur, for which they admire us; and I shall nonsense to admire Madame de Boufflers, though her nonsense is not the result of nonsense, but of sense, and consequently not the genuine nonsense that I honour. When she was here, she read a tragedy in prose to me, of her own composition, taken from "The Spectator:" the language is beautiful and so are the sentiments.

There is a Madame de Beaumont who has lately written a very pretty novel, called "Lettres du Marquis du Roselle." It is imitated, too, from an English standard, and in my opinion a most woful one; I mean the works of Richardson, who wrote those deplorably tedious lamentations, "Clarissa" and "Sir Charles Grandison," which are pictures of high life as conceived by a bookseller, and romances as they would be spiritualized by a Methodist teacher: but Madame de Beaumont has almost avoided sermons, and almost reconciled sentiments and common sense....