Letters of Horace Walpole - Volume I 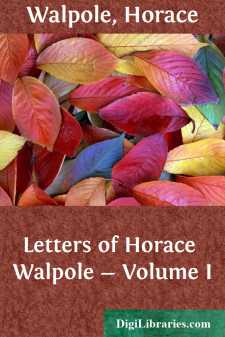 A SELECTION FROM THE LETTERS OF HORACE WALPOLE. MARRIAGE OF THE PRINCESS OF WALES—VERY LIVELY.[1]

[Footnote 1: This letter, written before he was nineteen, is worth noticing as a proof how innate was his liveliness of style, since in that respect few of the productions of his maturer age surpasses it. It also shows how strong already was his expectations that his letters would hereafter be regarded as interesting and valuable.]

[Footnote 1: George Montagu, Esq., of Roel, in the county of Gloucester, son of Brigadier-General Edward Montagu, and long M.P. for Northampton. He was the grandnephew of the first Earl of Halifax of the Montagu family, the statesman and poet, and was the contemporary at Eton of Walpole and Gray. When his cousin, the Earl of Halifax, was Lord-Lieutenant of Ireland, he was his secretary; and when Lord North was Chancellor of the Exchequer, he occupied the same position with him. He died May 10, 1780, leaving the bulk of his fortune to Lord North. Walpole's letters to him, 272 in number, and dating between 1736 and 1770, were first published in 1818, "from the Originals in the possession of the Editor." There was a coolness between Walpole and Montagu several years before the latter's death, the correspondence dropping very abruptly. The cause is explained by Walpole in a letter to Cole, dated May 11, 1780. Mr. Montagu's brother, Edward, was killed at Fontenoy. His sister, Arabella, was married to a Mr. Wetenhall—a relation of the Wetenhall mentioned in De Grammont. "Of Mr. Montagu, it is only remembered that he was a gentleman-like body of the vieille cour, and that he was usually attended by his brother John (the Little John of Walpole's correspondence), who was a midshipman at the age of sixty, and found his chief occupation in carrying about his brother's snuff-box" (Quarterly Rev. for April, 1818, p. 131).]

Dear Sir,—Unless I were to be married myself, I should despair ever being able to describe a wedding so well as you have done: had I known your talent before, I would have desired an epithalamium. I believe the Princess[1] will have more beauties bestowed on her by the occasional poets, than even a painter would afford her. They will cook up a new Pandora, and in the bottom of the box enclose Hope, that all they have said is true. A great many, out of excess of good breeding, having heard it was rude to talk Latin before women, propose complimenting her in English; which she will be much the better for. I doubt most of them, instead of fearing their compositions should not be understood, should fear they should: they write they don't know what, to be read by they don't know who. You have made me a very unreasonable request, which I will answer with another as extraordinary: you desire I would burn your letters: I desire you would keep mine. I know but of one way of making what I send you useful, which is, by sending you a blank sheet: sure you would not grudge threepence for a halfpenny sheet, when you give as much for one not worth a farthing....