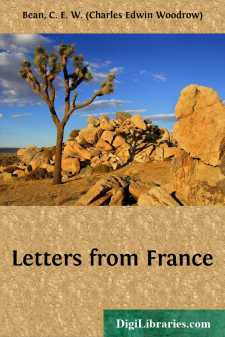 CHAPTER I A PADRE WHO SAID THE RIGHT THING

The sun glared from a Mediterranean sky and from the surface of the Mediterranean sea. The liner heaved easily to a slow swell. In the waist of the ship a densely packed crowd of sunburnt faces upturned towards a speaker who leaned over the rail of the promenade deck above. Beside the speaker was a slight figure with three long rows of ribbons across the left breast. Every man in the Australian Imperial Force is as proud of those ribbons as the leader who wears them so modestly.

Australian ships had been moving through those waters for days. High over one's head, as one listened to that speaker, there sawed the wireless aerial backwards and forwards across the silver sky. Only yesterday that aerial had intercepted a stammering signal from far, far away over the brim of the world. "S.O.S.," it ran, "S.O.S." There followed half inarticulate fragments of a latitude. That evening about sundown we ran into the shreds of some ocean conversation about boats' crews, and about someone who was still absent—just that broken fragment in the buzz of the wireless conversation which runs around the world. A big Australian transport, we knew, was some twelve hours away from us upon the waters. Could it be about her that these personages of the ocean were calling one to another? Days afterwards we heard that it had not been an Australian or any other transport.

Somewhere in those dazzling seas there was an eye watching for us too, just above the water, and always waiting—waiting—waiting—. It would have been a rich harvest, that crowded deck below one. If the monster struck just there he could not fail to kill many with the mere explosion. But I don't believe a man in the crowd gave it a thought. The strong, tanned, clean-shaven faces under the old slouch hats were all gazing up in rapt attention at the speaker. For he was telling them the right thing.

He was not a regular chaplain—there was no regular padre in that ship, and we were likely to have no church parade until there was discovered amongst the reinforcement officers one little subaltern who was a padre in Tasmania, but who was going to the front as a fighting man. We had heard other padres speak to troops on the eve of their plunging into a great enterprise, when the sermon had made some of us wish that we only had the power and gift to seize that wonderful opportunity as it might be seized, and have done with texts and doctrines and speak to the men as men. Every man there had his ideals—he was giving his life, as like as not, because, however crude the exterior, there was an eye within which saw truly and surely through the mists. And now when they stood on the brink of the last great sacrifice, could he not seize upon those truths—?

But this time we simply stood and wondered. For that slip of a figure in khaki, high up there with one hand on the stanchion and the other tapping the rail, was telling them a thousand times better than any of us could ever have put it to himself exactly the things one would have longed to say.

He told them first, his voice firm with conviction, that God had not populated this world with saints, but with ordinary human men; and that they need not fear that, simply because they might not have been churchgoers or lived what the world calls religious lives, therefore God would desert them in the danger and trials and perhaps the death to which they went. "If I thought that God wished any man to be tortured eternally," he said, "to be tortured for all time and not to have any hope of heaven, then I would go down to Hell cheerfully with a smile on my lips rather than worship such a being. I don't know whether a man may put it beyond the power of God to help him....