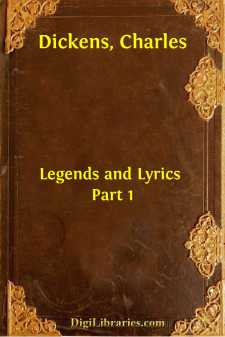 AN INTRODUCTION BY CHARLES DICKENS

In the spring of the year 1853, I observed, as conductor of the weekly journal Household Words, a short poem among the proffered contributions, very different, as I thought, from the shoal of verses perpetually setting through the office of such a periodical, and possessing much more merit.  Its authoress was quite unknown to me.  She was one Miss Mary Berwick, whom I had never heard of; and she was to be addressed by letter, if addressed at all, at a circulating library in the western district of London.  Through this channel, Miss Berwick was informed that her poem was accepted, and was invited to send another.  She complied, and became a regular and frequent contributor.  Many letters passed between the journal and Miss Berwick, but Miss Berwick herself was never seen.

How we came gradually to establish, at the office of Household Words, that we knew all about Miss Berwick, I have never discovered.  But we settled somehow, to our complete satisfaction, that she was governess in a family; that she went to Italy in that capacity, and returned; and that she had long been in the same family.  We really knew nothing whatever of her, except that she was remarkably business-like, punctual, self-reliant, and reliable: so I suppose we insensibly invented the rest.  For myself, my mother was not a more real personage to me, than Miss Berwick the governess became.

This went on until December, 1854, when the Christmas number, entitled The Seven Poor Travellers, was sent to press.  Happening to be going to dine that day with an old and dear friend, distinguished in literature as Barry Cornwall, I took with me an early proof of that number, and remarked, as I laid it on the drawing-room table, that it contained a very pretty poem, written by a certain Miss Berwick.  Next day brought me the disclosure that I had so spoken of the poem to the mother of its writer, in its writer’s presence; that I had no such correspondent in existence as Miss Berwick; and that the name had been assumed by Barry Cornwall’s eldest daughter, Miss Adelaide Anne Procter.

The anecdote I have here noted down, besides serving to explain why the parents of the late Miss Procter have looked to me for these poor words of remembrance of their lamented child, strikingly illustrates the honesty, independence, and quiet dignity, of the lady’s character.  I had known her when she was very young; I had been honoured with her father’s friendship when I was myself a young aspirant; and she had said at home, “If I send him, in my own name, verses that he does not honestly like, either it will be very painful to him to return them, or he will print them for papa’s sake, and not for their own.  So I have made up my mind to take my chance fairly with the unknown volunteers.”

Perhaps it requires an editor’s experience of the profoundly unreasonable grounds on which he is often urged to accept unsuitable articles—such as having been to school with the writer’s husband’s brother-in-law, or having lent an alpenstock in Switzerland to the writer’s wife’s nephew, when that interesting stranger had broken his own—fully to appreciate the delicacy and the self-respect of this resolution....