Lectures on the English Poets Delivered at the Surrey Institution 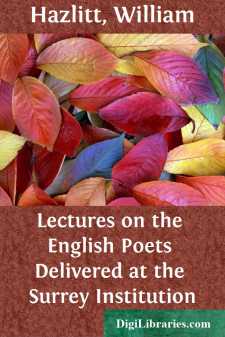 LECTURE I.—INTRODUCTORY ON POETRY IN GENERAL.

The best general notion which I can give of poetry is, that it is the natural impression of any object or event, by its vividness exciting an involuntary movement of imagination and passion, and producing, by sympathy, a certain modulation of the voice, or sounds, expressing it.

In treating of poetry, I shall speak first of the subject-matter of it, next of the forms of expression to which it gives birth, and afterwards of its connection with harmony of sound.

Poetry is the language of the imagination and the passions. It relates to whatever gives immediate pleasure or pain to the human mind. It comes home to the bosoms and businesses of men; for nothing but what so comes home to them in the most general and intelligible shape, can be a subject for poetry. Poetry is the universal language which the heart holds with nature and itself. He who has a contempt for poetry, cannot have much respect for himself, or for any thing else. It is not a mere frivolous accomplishment, (as some persons have been led to imagine) the trifling amusement of a few idle readers or leisure hours—it has been the study and delight of mankind in all ages. Many people suppose that poetry is something to be found only in books, contained in lines of ten syllables, with like endings: but wherever there is a sense of beauty, or power, or harmony, as in the motion of a wave of the sea, in the growth of a flower that "spreads its sweet leaves to the air, and dedicates its beauty to the sun,"—there is poetry, in its birth. If history is a grave study, poetry may be said to be a graver: its materials lie deeper, and are spread wider. History treats, for the most part, of the cumbrous and unwieldly masses of things, the empty cases in which the affairs of the world are packed, under the heads of intrigue or war, in different states, and from century to century: but there is no thought or feeling that can have entered into the mind of man, which he would be eager to communicate to others, or which they would listen to with delight, that is not a fit subject for poetry. It is not a branch of authorship: it is "the stuff of which our life is made." The rest is "mere oblivion," a dead letter: for all that is worth remembering in life, is the poetry of it. Fear is poetry, hope is poetry, love is poetry, hatred is poetry; contempt, jealousy, remorse, admiration, wonder, pity, despair, or madness, are all poetry. Poetry is that fine particle within us, that expands, rarefies, refines, raises our whole being: without it "man's life is poor as beast's." Man is a poetical animal: and those of us who do not study the principles of poetry, act upon them all our lives, like Moliere's Bourgeois Gentilhomme, who had always spoken prose without knowing it. The child is a poet in fact, when he first plays at hide-and-seek, or repeats the story of Jack the Giant-killer; the shepherd-boy is a poet, when he first crowns his mistress with a garland of flowers; the countryman, when he stops to look at the rainbow; the city-apprentice, when he gazes after the Lord-Mayor's show; the miser, when he hugs his gold; the courtier, who builds his hopes upon a smile; the savage, who paints his idol with blood; the slave, who worships a tyrant, or the tyrant, who fancies himself a god;—the vain, the ambitious, the proud, the choleric man, the hero and the coward, the beggar and the king, the rich and the poor, the young and the old, all live in a world of their own making; and the poet does no more than describe what all the others think and act....