Lectures on Landscape Delivered at Oxford in Lent Term, 1871 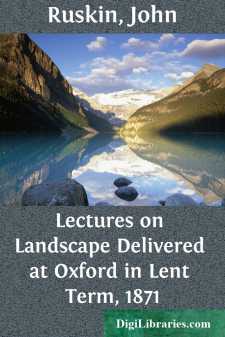 1. In my inaugural lecture, I stated that while holding this professorship I should direct you, in your practical exercises, chiefly to natural history and landscape. And having in the course of the past year laid the foundational elements of art sufficiently before you, I will invite you, now, to enter on real work with me; and accordingly I propose during this and the following term to give you what practical leading I can in elementary study of landscape, and of a branch of natural history which will form a kind of center for all the rest—Ichthyology.

In the outset I must shortly state to you the position which landscape painting and animal painting hold towards the higher branches of art.

2. Landscape painting is the thoughtful and passionate representation of the physical conditions appointed for human existence. It imitates the aspects, and records the phenomena, of the visible things which are dangerous or beneficial to men; and displays the human methods of dealing with these, and of enjoying them or suffering from them, which are either exemplary or deserving of sympathetic contemplation. Animal painting investigates the laws of greater and less nobility of character in organic form, as comparative anatomy examines those of greater and less development in organic structure; and the function of animal painting is to bring into notice the minor and unthought of conditions of power or beauty, as that of physiology is to ascertain the minor conditions of adaptation.

3. Questions as to the purpose of arrangements or the use of the organs of an animal are, however, no less within the province of the painter than of the physiologist, and are indeed more likely to commend themselves to you through drawing than dissection. For as you dissect an animal you generally assume its form to be necessary and only examine how it is constructed; but in drawing the outer form itself attentively you are led necessarily to consider the mode of life for which it is disposed, and therefore to be struck by any awkwardness or apparent uselessness in its parts. After sketching one day several heads of birds it became a vital matter of interest to me to know the use of the bony process on the head of the hornbill; but on asking a great physiologist, I found that it appeared to him an absurd question, and was certainly an unanswerable one.

4. I have limited, you have just heard, landscape painting to the representation of phenomena relating to human life. You will scarcely be disposed to admit the propriety of such a limitation; and you will still less be likely to conceive its necessary strictness and severity, unless I convince you of it by somewhat detailed examples.

Here are two landscapes by Turner in his greatest time—Vesuvius in repose, .

One is a beautiful harmony of cool color; and the other of hot, and they are both exquisitely designed in ornamental lines. But they are not painted for those qualities. They are painted because the state of the scene in one case is full of delight to men; and in the other of pain and danger....