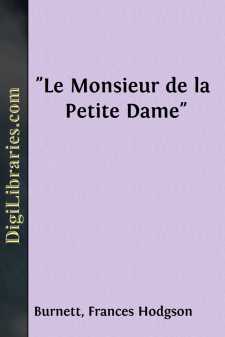 It was Madame who first entered the box, and Madame was bright with youthful bloom, bright with jewels, and, moreover, a beauty. She was a little creature, with childishly large eyes, a low, white forehead, reddish-brown hair, and Greek nose and mouth.

"Clearly," remarked the old lady in the box opposite, "not a Frenchwoman. Her youth is too girlish, and she has too petulant an air of indifference."

This old lady in the box opposite was that venerable and somewhat severe aristocrat, Madame de Castro, and having gazed for a moment or so a little disapprovingly at the new arrival, she turned her glasses to the young beauty's companion and uttered an exclamation.

It was at Monsieur she was looking now. Monsieur had followed his wife closely, bearing her fan and bouquet and wrap, and had silently seated him self a little behind her and in the shadow.

It was not an unnatural exclamation. Fate had not been so kind to the individual referred to as she might have been—in fact she had been definitely cruel. He was small of figure, insignificant, dark, and wore a patient sphynx-like air of gravity. He did not seem to speak or move, simply sat in the shadow holding his wife's belongings, apparently almost entirely unnoticed by her.

"I don't know him at all," said Madame de Castro; "though that is not to be wondered at, since I have exiled myself long enough to forget and be forgotten by half Paris. What is his name?"

The gentleman at her side—a distinguished-looking old young man, with a sarcastic smile—began with the smile, and ended with a half laugh.

"They call him," he replied, "Le Monsieur de la petite Dame. His name is Villefort."

"Le Monsieur de la petite Dame," repeated Madame, testily. "That is a title of new Paris—the Paris of your Americans and English. It is villainously ill-bred."

M. Renard's laugh receded into the smile again, and the smile became of double significance.

"True," he acquiesced, "but it is also villainously apropos. Look for yourself."

Madame did so, and her next query, after she had dropped her glass again, was a sharp one.

"She is what you are pleased to call one of our Americans! You know the class,"—with a little wave of the hand,—"rich, unconventional, comfortable people, who live well and dress well, and have an incomprehensibly naïve way of going to impossible places and doing impossible things by way of enjoyment. Our fair friend there, for instance, has probably been round the world upon several occasions, and is familiar with a number of places and objects of note fearful to contemplate. They came here as tourists, and became fascinated with European life. The most overwhelming punishment which could be inflicted upon that excellent woman, the mother, would be that she should be compelled to return to her New York, or Philadelphia, or Boston, whichsoever it may be."

"Humph!" commented Madame. "But you have not told me the name."

"Madame Villefort's? No, not yet. It was Trent—Mademoiselle Bertha Trent."

"She is not twenty yet," said Madame, in a queer, grumbling tone. "What did she marry that man for?"

"God knows," replied M. Renard, not too devoutly, "Paris does not."

For some reason best known to herself, Madame de Castro looked angry....