Laxd?la Saga Translated from the Icelandic 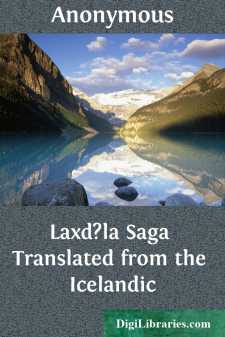 Chap. I Of Ketill Flatnose and his Descendants, 9th Century A.D. Ketill's family

Ketill Flatnose was the name of a man. He was the son of Bjorn the Ungartered. Ketill was a mighty and high-born chieftain (hersir) in Norway. He abode in Raumsdale, within the folkland of the Raumsdale people, which lies between Southmere and Northmere. Ketill Flatnose had for wife Yngvild, daughter of Ketill Wether, who was a man of exceeding great worth. They had five children; one was named Bjorn the Eastman, and another Helgi Bjolan. Thorunn the Horned was the name of one of Ketill's daughters, who was the wife of Helgi the Lean, son of Eyvind Eastman, and Rafarta, daughter of Kjarval, the Irish king. Unn "the Deep-minded" was another of Ketill's daughters, and was the wife of Olaf the White, son of Ingjald, who was son of Frodi the Valiant, who was slain by the Svertlings. Jorunn, "Men's Wit-breaker," was the name of yet another of Ketill's daughters. She was the mother of Ketill the Finn, who settled on land at Kirkby. His son was Asbjorn, father of Thorstein, father of Surt, the father of Sighat the Speaker-at-Law.

Chap. II Ketill and his Sons prepare to leave Norway

The tyranny of King HaraldIn the latter days of Ketill arose the power of King Harald the Fairhaired, in such a way that no folkland king or other great men could thrive in the land unless he alone ruled what title should be theirs. When Ketill heard that King Harald was minded to put to him the same choice as to other men of might—namely, not only to put up with his kinsmen being left unatoned, but to be made himself a hireling to boot—he calls together a meeting of his kinsmen, and began his speech in this wise: "You all know what dealings there have been between me and King Harald, the which there is no need of setting forth; for a greater need besets us, to wit, to take counsel as to the troubles that now are in store for us. I have true news of King Harald's enmity towards us, and to me it seems that we may abide no trust from that quarter. It seems to me that there are two choices left us, either to fly the land or to be slaughtered each in his own seat. Now, as for me, my will is rather to abide the same death that my kinsmen suffer, but I would not lead you by my Ketill's speech wilfulness into so great a trouble, for I know the temper of my kinsmen and friends, that ye would not desert me, even though it would be some trial of manhood to follow me." Bjorn, the son of Ketill, answered: "I will make known my wishes at once. I will follow the example of noble men, and fly this land. For I deem myself no greater a man by abiding at home the thralls of King Harald, that they may chase me away from my own possessions, or that else I may have to come by utter death at their hands." At this there was made a good cheer, and they all thought it was spoken bravely. This counsel then was settled, that they should leave the country, for the sons of Ketill urged it much, and no one spoke against it....