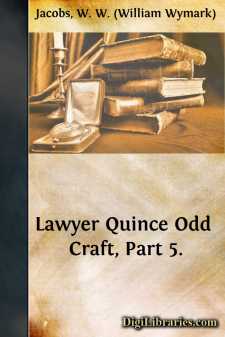 Lawyer Quince, so called by his neighbours in Little Haven from his readiness at all times to place at their disposal the legal lore he had acquired from a few old books while following his useful occupation of making boots, sat in a kind of wooden hutch at the side of his cottage plying his trade. The London coach had gone by in a cloud of dust some three hours before, and since then the wide village street had slumbered almost undisturbed in the sunshine.

Hearing footsteps and the sound of voices raised in dispute caused him to look up from his work. Mr. Rose, of Holly Farm, Hogg, the miller, and one or two neighbours of lesser degree appeared to be in earnest debate over some point of unusual difficulty.

Lawyer Quince took a pinch of snuff and bent to his work again. Mr. Rose was one of the very few who openly questioned his legal knowledge, and his gibes concerning it were only too frequent. Moreover, he had a taste for practical joking, which to a grave man was sometimes offensive.

"Well, here he be," said Mr. Hogg to the farmer, as the group halted in front of the hutch. "Now ask Lawyer Quince and see whether I ain't told you true. I'm willing to abide by what he says."

Mr. Quince put down his hammer and, brushing a little snuff from his coat, leaned back in his chair and eyed them with grave confidence.

"It's like this," said the farmer. "Young Pascoe has been hanging round after my girl Celia, though I told her she wasn't to have nothing to do with him. Half an hour ago I was going to put my pony in its stable when I see a young man sitting there waiting."

"He's there yet," said the farmer. "I locked him in, and Hogg here says that I've got the right to keep him locked up there as long as I like. I say it's agin the law, but Hogg he says no. I say his folks would come and try to break open my stable, but Hogg says if they do I can have the law of 'em for damaging my property."

"So you can," interposed Mr. Hogg, firmly. "You see whether Lawyer Quince don't say I'm right."

Mr. Quince frowned, and in order to think more deeply closed his eyes. Taking advantage of this three of his auditors, with remarkable unanimity, each closed one.

"It's your stable," said Mr. Quince, opening his eyes and speaking with great deliberation, "and you have a right to lock it up when you like."

"If anybody's there that's got no business there, that's his look-out," continued Mr. Quince. "You didn't induce him to go in?"

"Certainly not," replied the farmer.

"I told him he can keep him there as long as he likes," said the jubilant Mr. Hogg, "and pass him in bread and water through the winder; it's got bars to it."

"Yes," said Mr. Quince, nodding, "he can do that. As for his folks knocking the place about, if you like to tie up one or two of them nasty, savage dogs of yours to the stable, well, it's your stable, and you can fasten your dogs to it if you like. And you've generally got a man about the yard."