Lavengro The Scholar, the Gypsy, the Priest 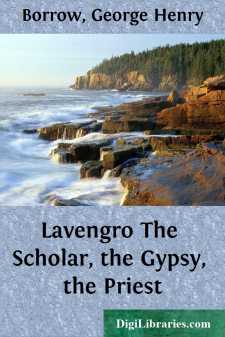 On an evening of July, in the year 18--, at East D---, a beautiful little town in a certain district of East Anglia, I first saw the light.

My father was a Cornish man, the youngest, as I have heard him say, of seven brothers.  He sprang from a family of gentlemen, or, as some people would call them, gentillâtres, for they were not very wealthy; they had a coat of arms, however, and lived on their own property at a place called Tredinnock, which being interpreted means the house on the hill, which house and the neighbouring acres had been from time immemorial in their possession.  I mention these particulars that the reader may see at once that I am not altogether of low and plebeian origin; the present age is highly aristocratic, and I am convinced that the public will read my pages with more zest from being told that I am a gentillâtre by birth with Cornish blood in my veins, of a family who lived on their own property at a place bearing a Celtic name, signifying the house on the hill, or more strictly the house on the hillock.

My father was what is generally termed a posthumous child—in other words, the gentillâtre who begot him never had the satisfaction of invoking the blessing of the Father of All upon his head, having departed this life some months before the birth of his youngest son.  The boy, therefore, never knew a father’s care; he was, however, well tended by his mother, whose favourite he was; so much so, indeed, that his brethren, the youngest of whom was considerably older than himself, were rather jealous of him.  I never heard, however, that they treated him with any marked unkindness; and it will be as well to observe here that I am by no means well acquainted with his early history, of which, indeed, as I am not writing his life, it is not necessary to say much.  Shortly after his mother’s death, which occurred when he was eighteen, he adopted the profession of arms, which he followed during the remainder of his life, and in which, had circumstances permitted, he would probably have shone amongst the best.  By nature he was cool and collected, slow to anger, though perfectly fearless, patient of control, of great strength, and, to crown all, a proper man with his hands.

With far inferior qualifications many a man has become a field-marshal or general; similar ones made Tamerlane, who was not a gentillâtre, but the son of a blacksmith, emperor of one-third of the world; but the race is not always for the swift, nor the battle for the strong, indeed I ought rather to say very seldom; certain it is, that my father, with all his high military qualifications, never became emperor, field-marshal, or even general; indeed, he had never an opportunity of distinguishing himself save in one battle, and that took place neither in Flanders, Egypt, nor on the banks of the Indus or Oxus, but in Hyde Park.

Smile not, gentle reader, many a battle has been fought in Hyde Park, in which as much skill, science and bravery have been displayed as ever achieved a victory in Flanders or by the Indus.  In such a combat as that to which I allude, I opine that even Wellington or Napoleon would have been heartily glad to cry for quarter ere the lapse of five minutes, and even the Blacksmith Tartar would, perhaps, have shrunk from the opponent with whom, after having had a dispute with him, my father engaged in single combat for one hour, at the end of which time the champions shook hands and retired, each having experienced quite enough of the other’s prowess.  The name of my father’s antagonist was Brain....