Laughter : an Essay on the Meaning of the Comic 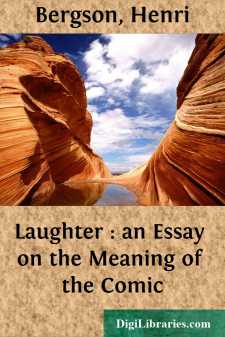 THE COMIC IN GENERAL—THE COMIC ELEMENT IN FORMS AND MOVEMENTS—EXPANSIVE FORCE OF THE COMIC.

What does laughter mean? What is the basal element in the laughable? What common ground can we find between the grimace of a merry-andrew, a play upon words, an equivocal situation in a burlesque and a scene of high comedy? What method of distillation will yield us invariably the same essence from which so many different products borrow either their obtrusive odour or their delicate perfume? The greatest of thinkers, from Aristotle downwards, have tackled this little problem, which has a knack of baffling every effort, of slipping away and escaping only to bob up again, a pert challenge flung at philosophic speculation. Our excuse for attacking the problem in our turn must lie in the fact that we shall not aim at imprisoning the comic spirit within a definition. We regard it, above all, as a living thing. However trivial it may be, we shall treat it with the respect due to life. We shall confine ourselves to watching it grow and expand. Passing by imperceptible gradations from one form to another, it will be seen to achieve the strangest metamorphoses. We shall disdain nothing we have seen. Maybe we may gain from this prolonged contact, for the matter of that, something more flexible than an abstract definition,—a practical, intimate acquaintance, such as springs from a long companionship. And maybe we may also find that, unintentionally, we have made an acquaintance that is useful. For the comic spirit has a logic of its own, even in its wildest eccentricities. It has a method in its madness. It dreams, I admit, but it conjures up, in its dreams, visions that are at once accepted and understood by the whole of a social group. Can it then fail to throw light for us on the way that human imagination works, and more particularly social, collective, and popular imagination? Begotten of real life and akin to art, should it not also have something of its own to tell us about art and life?

At the outset we shall put forward three observations which we look upon as fundamental. They have less bearing on the actually comic than on the field within which it must be sought.

The first point to which attention should be called is that the comic does not exist outside the pale of what is strictly HUMAN. A landscape may be beautiful, charming and sublime, or insignificant and ugly; it will never be laughable. You may laugh at an animal, but only because you have detected in it some human attitude or expression. You may laugh at a hat, but what you are making fun of, in this case, is not the piece of felt or straw, but the shape that men have given it,—the human caprice whose mould it has assumed. It is strange that so important a fact, and such a simple one too, has not attracted to a greater degree the attention of philosophers. Several have defined man as "an animal which laughs." They might equally well have defined him as an animal which is laughed at; for if any other animal, or some lifeless object, produces the same effect, it is always because of some resemblance to man, of the stamp he gives it or the use he puts it to....