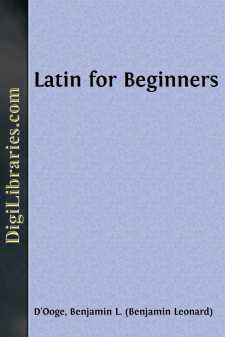 LATIN FOR BEGINNERS TO THE STUDENT—BY WAY OF INTRODUCTION

What is Latin? If you will look at the map of Italy on the opposite page, you will find near the middle of the peninsula and facing the west coast a district called Latium,1 and Rome its capital. The Latin language, meaning the language of Latium, was spoken by the ancient Romans and other inhabitants of Latium, and Latin was the name applied to it after the armies of Rome had carried the knowledge of her language far beyond its original boundaries. As the English of to-day is not quite the same as that spoken two or three hundred years ago, so Latin was not always the same at all times, but changed more or less in the course of centuries. The sort of Latin you are going to learn was in use about two thousand years ago. And that period has been selected because the language was then at its best and the greatest works of Roman literature were being produced. This period, because of its supreme excellence, is called the Golden Age of Roman letters.

The Spread of Latin. For some centuries after Rome was founded, the Romans were a feeble and insignificant people, their territory was limited to Latium, and their existence constantly threatened by warlike neighbors. But after the third century before Christ, Rome’s power grew rapidly. She conquered all Italy, then reached out for the lands across the sea and beyond the Alps, and finally ruled over the whole ancient world. The empire thus established lasted for more than four hundred years. The importance of Latin increased with the growth of Roman power, and what had been a dialect spoken by a single tribe became the universal language. Gradually the language changed somewhat, developing differently in different countries. In Italy it has become Italian, in Spain Spanish, and in France French. All these nations, therefore, are speaking a modernized form of Latin.

The Romans and the Greeks. In their career of conquest the Romans came into conflict with the Greeks. The Greeks were inferior to the Romans in military power, but far superior to them in culture. They excelled in art, literature, music, science, and philosophy. Of all these pursuits the Romans were ignorant until contact with Greece revealed to them the value of education and filled them with the thirst for knowledge. And so it came about that while Rome conquered Greece by force of arms, Greece conquered Rome by force of her intellectual superiority and became her schoolmaster. It was soon the established custom for young Romans to go to Athens and to other centers of Greek learning to finish their training, and the knowledge of the Greek language among the educated classes became universal. At the same time many cultured Greeks—poets, artists, orators, and philosophers—flocked to Rome, opened schools, and taught their arts. Indeed, the preëminence of Greek culture became so great that Rome almost lost her ambition to be original, and her writers vied with each other in their efforts to reproduce in Latin what was choicest in Greek literature....