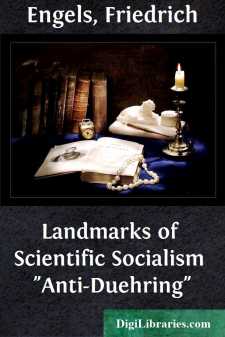 When Dr. Eugene Duehring, privat docent at Berlin University, in 1875, proclaimed the fact that he had become converted to Socialism, he was not content to take the socialist movement as he found it, but set out forthwith to promulgate a theory of his own. His was a most elaborate and self-conscious mission. He stood forth as the propagandist not only of certain specific and peculiar views of socialism but as the originator of a new philosophy, and the propounder of strange and wonderful theories with regard to the universe in general. The taunt as to his all-comprehensiveness of intellect, with which Engels pursues him somewhat too closely and much too bitterly, could not have affected Herr Duehring very greatly. He had his own convictions with respect to that comprehensive intellect of his and few will be found to deny that he had the courage of his convictions.

Thirty years have gone since Duehring published the fact of his conversion to socialism. The word "conversion" contains in itself the distinction between the socialism of thirty years ago and that of to-day. What was then a peculiar creed has now become a very widespread notion. Men are not now individually converted to socialism but whole groups and classes are driven into the socialist ranks by the pressure of circumstances. The movement springs up continually in new and unexpected places. Here it may languish apparently, there it gives every indication of strong, new and vigorous life.

The proletariat of the various countries race as it were towards the socialist goal and, as they change in their respective positions, the economic and political fields on which they operate furnish all the surprises and fascinations of a race course. In 1892 Engels wrote that the German Empire would in all probability be the scene of the first great victory of the European proletariat. But thirteen years have sufficed to bog the German movement in the swamps of Parliamentarianism. Great Britain, whose Chartist movement was expected to provide the British proletariat with a tradition, has furnished few examples of skill in the management of proletarian politics, but existing society in Great Britain has none the less been thoroughly undermined. The year before that in which Herr Duehring made his statement of conversion, the British Liberals had suffered a defeat which, in spite of an apparent recuperation in 1880, proved the downfall of modern Liberalism in Great Britain, and showed that the Liberal Party could no longer claim to be the party of the working class. Not only that, but the British philosophic outlook has become completely changed. The nonconformist conscience grows less and less the final court of appeal in matters political. A temporary but fierce attack of militant imperialism coupled with the very general acceptance of an empiric collectivism has sufficed to destroy old ideas and to make the road to victory easier for a determined and relentless working class movement....