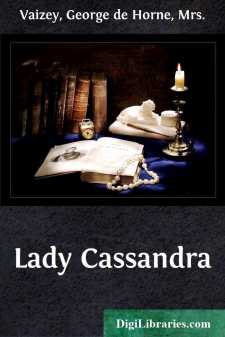 Cassandra Raynor stood on the terrace of her great house, looking over the sweep of country stretching to right and left, and in her heart was the deadliest of all weariness,—the weariness of repletion. It seemed at that moment the bitterest cross that she had nothing left for which to wish, that everything good which the world could give was hers already, and had left her cold.

The stately old house was hers, with its treasures of old-world furnishings, the same furnishings which had ministered to generations dead and gone, and would minister to others yet to come. It would have been considered sacrilege to stamp the individuality of the chatelaine of an hour on those historic halls. The distant stretch of country was part of her estate, but the sight of it brought no thrill to Cassandra’s veins. Her jaded eyes had wearied of the familiar landscape, as they had wearied of the interior of the house, in which she seemed more a tenant than a mistress.

Cassandra wandered idly to and fro, obsequiously shadowed by obsequious servants, and wondered what it would feel like to live in a semi-detached villa, and arrange one’s own rooms in one’s own way, and frill pink silk curtains, and festoon lamp shades, and run to the door to meet a husband returning from the City. She herself had never run to meet Bernard. If she had once begun that sort of thing, she might have been running all day long, for he was always in and out. She wondered what it would feel like to have a husband who disappeared regularly at nine a.m., and returned at seven. One might be quite glad to see him!

Cassandra had done her duty to the family by producing a healthy male child within eighteen months of her marriage. So sorely had she suffered in giving birth to her son that there was no hope of a second child to bear him company, but there had been no regret nor self-pity in her mother’s heart during those first hours in which he lay, red and crumpled, within her arms. Never while she lived could Cassandra forget the rest, the thankfulness, the deep, uplifted joy of those hours. It had seemed to her then that with the coming of the child all gaps must be filled, and all the poverty of life be turned into gold. But... was it her own fault, or the fault of circumstances which had brought about the disillusionment? It had been difficult to believe that the stolid, well-behaved young person, who walked abroad between two white-robed nurses, spoke when he was spoken to, and tucked his feeder carefully beneath his chin, was really her own child, bone of her bone, flesh of her flesh; the wonder child of whom she had dreamt such dreams.

Cassandra had known nothing of babies; Mrs Mason, the head nurse, knew everything, and Bernard was tenacious of the safety of his heir. He thought it a pity for his wife to “interfere,” and said as much with his usual frankness. He did not approve of young children being in evidence, and discouraged the boy’s appearance downstairs. At an unusually early age also he selected a preparatory school at the far end of the county, and henceforth Bernard the younger visited home for the holidays only, and was no longer a member of the household proper....