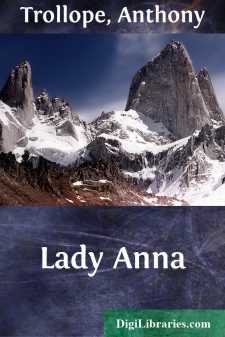 CHAPTER I. THE EARLY HISTORY OF LADY LOVEL.

Women have often been hardly used by men, but perhaps no harder usage, no fiercer cruelty was ever experienced by a woman than that which fell to the lot of Josephine Murray from the hands of Earl Lovel, to whom she was married in the parish church of Applethwaite,—a parish without a village, lying among the mountains of Cumberland,—on the 1st of June, 181—. That her marriage was valid according to all the forms of the Church, if Lord Lovel were then capable of marrying, no one ever doubted; nor did the Earl ever allege that it was not so. Lovel Grange is a small house, surrounded by a small domain,—small as being the residence of a rich nobleman, lying among the mountains which separate Cumberland from Westmoreland, about ten miles from Keswick, very lovely, from the brightness of its own green sward and the luxuriance of its wild woodland, from the contiguity of overhanging mountains, and from the beauty of Lovel Tarn, a small lake belonging to the property, studded with little islands, each of which is covered with its own thicket of hollies, birch, and dwarfed oaks. The house itself is poor, ill built, with straggling passages and low rooms, and is a sombre, ill-omened looking place. When Josephine Murray was brought there as a bride she thought it to be very sombre and ill-omened; but she loved the lakes and mountains, and dreamed of some vague mysterious joy of life which was to come to her from the wildness of her domicile.

I fear that she had no other ground, firmer than this, on which to found her hopes of happiness. She could not have thought Lord Lovel to be a good man when she married him, and it can hardly be said that she loved him. She was then twenty-four years old, and he had counted double as many years. She was very beautiful, dark, with large, bold, blue eyes, with hair almost black, tall, well made, almost robust, a well-born, brave, ambitious woman, of whom it must be acknowledged that she thought it very much to be the wife of a lord. Though our story will be concerned much with her sufferings, the record of her bridal days may be very short. It is with struggles that came to her in after years that we shall be most concerned, and the reader, therefore, need be troubled with no long description of Josephine Murray as she was when she became the Countess Lovel. It is hoped that her wrongs may be thought worthy of sympathy,—and may be felt in some sort to atone for the ignoble motives of her marriage.

The Earl, when he found his bride, had been living almost in solitude for a twelvemonth. Among the neighbouring gentry in the lake country he kept no friendly relations. His property there was small, and his character was evil. He was an English earl, and as such known in some unfamiliar fashion to those who know all earls; but he was a man never seen in Parliament, who had spent the greater part of his manhood abroad, who had sold estates in other counties, converting unentailed acres into increased wealth, but wealth of a kind much less acceptable to the general English aristocrat than that which comes direct from land....