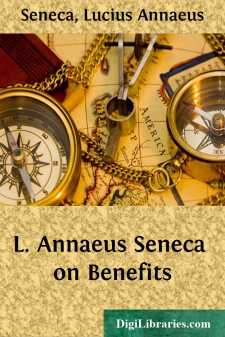 Seneca, the favourite classic of the early fathers of the church and of the Middle Ages, whom Jerome, Tertullian, and Augustine speak of as "Seneca noster," who was believed to have corresponded with St. Paul, and upon whom [Footnote: On the "De Clementia," an odd subject for the man who burned Servetus alive for differing with him.] Calvin wrote a commentary, seems almost forgotten in modern times. Perhaps some of his popularity may have been due to his being supposed to be the author of those tragedies which the world has long ceased to read, but which delighted a period that preferred Euripides to Aeschylus: while casuists must have found congenial matter in an author whose fantastic cases of conscience are often worthy of Sanchez or Escobar. Yet Seneca's morality is always pure, and from him we gain, albeit at second hand, an insight into the doctrines of the Greek philosophers, Zeno, Epicurus, Chrysippus, &c., whose precepts and system of religious thought had in cultivated Roman society taken the place of the old worship of Jupiter and Quirinus.

Since Lodge's edition (fol. 1614), no complete translation of Seneca has been published in England, though Sir Roger L'Estrange wrote paraphrases of several Dialogues, which seem to have been enormously popular, running through more than sixteen editions. I think we may conjecture that Shakespeare had seen Lodge's translation, from several allusions to philosophy, to that impossible conception "the wise man," and especially from a passage in "All's Well that ends Well," which seems to breathe the very spirit of "De Beneficiis."

"'Tis pity—That wishing well had not a body in itWhich might be felt: that we, the poorer born,Whose baser stars do shut us up in wishes,Might with effects of them follow our friendsAnd show what we alone must think; which neverReturns us thanks.""All's Well that ends Well," Act i. sc. 1.

Though, if this will not fit the supposed date of that play, he may have taken the idea from "The Woorke of Lucius Annaeus Seneca concerning Benefyting, that is too say, the dooing, receyving, and requyting of good turnes, translated out of Latin by A. Golding. J. Day, London, 1578." And even during the Restoration, Pepys's ideal of virtuous and lettered seclusion is a country house in whose garden he might sit on summer afternoons with his friend, Sir W. Coventry, "it maybe, to read a chapter of Seneca." In sharp contrast to this is Vahlen's preface to the minor Dialogues, which he edited after the death of his friend Koch, who had begun that work, in which he remarks that "he has read much of this writer, in order to perfect his knowledge of Latin, for otherwise he neither admires his artificial subtleties of thought, nor his childish mannerisms of style" (Vahlen, preface, p. v., ed. 1879, Jena).

Yet by the student of the history of Rome under the Caesars, Seneca is not to be neglected, because, whatever may be thought of the intrinsic merit of his speculations, he represents, more perhaps even than Tacitus, the intellectual characteristics of his age, and the tone of society in Rome—nor could we well spare the gossiping stories which we find imbedded in his graver dissertations....