by F. A. (Frederick Arthur) Mckenzie 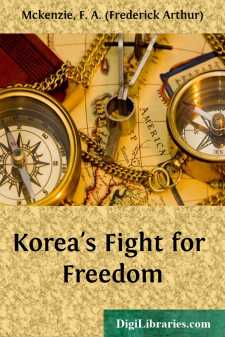 "Mr. F.A. McKenzie has been abused in the columns of the Japanese press_ with a violence which, in the absence of any reasoned controversy, indicated a last resource. In answer to his specific charges, only one word has been uttered—'lies!'

"Yet these charges embrace crimes of the first magnitude—murder, plunder, outrage, incendiarism, and in short all the horrors that make up tyranny of the worst description. It is difficult to see how Mr. McKenzie's sincerity could be called into question, for he, too, like many other critics of the new Administration, was once a warm friend and supporter of Japan.

"In those days, his contributions were quoted at great length in the newspapers of Tokyo, while the editorial columns expressed their appreciation of his marked capacity. So soon, however, as he found fault with the conditions prevailing in Korea, he was contemptuously termed a 'yellow journalist' and a 'sensation monger.'"—From "Empires of the Far East" by F. Lancelot Lawson. London. Grant Richards.

"Mr. McKenzie was perhaps the only foreigner outside the ranks of missionaries who ever took the trouble to elude the vigilance of the Japanese, escape from Seoul into the interior, and there see with his own eyes what the Japanese were really doing. And yet when men of this kind, who write of things which come within scope of personal observation and enquiry, have the presumption to tell the world that all is not well in Korea, and that the Japanese cannot be acquitted of guilt in this context, grave pundits in Tokyo, London and New York gravely rebuke them for following their own senses in preference to the official returns of the Residency General. It is a poor joke at the best! Nor is it the symptom of a powerful cause that the failure of the Japanese authorities to 'pacify' the interior is ascribed to 'anti-Japanese' writers like Mr. McKenzie."—From "Peace and War in the Far East," by E.J. Harrison. Yokohama. Kelly and Walsh.

The peaceful uprising of the people of Korea against Japan in the spring of 1919 came as a world surprise. Here was a nation that had been ticketed and docketed by world statesmen as degenerate and cowardly, revealing heroism of a very high order.

The soldier facing the enemy in the open is inspired by the atmosphere of war, and knows that he has at least a fighting chance against his foe. The Koreans took their stand—their women and children by their side—without weapons and without means of defense. They pledged themselves ahead to show no violence. They had all too good reason to anticipate that their lot would be the same as that of others who had preceded them—torture as ingenious and varied as Torquemada and his familiars ever practiced.

They were not disappointed. They were called on to endure all that they had anticipated, in good measure, pressed down and running over....