Knights of Art; stories of the Italian painters 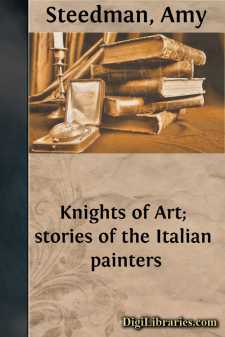 What would we do without our picture-books, I wonder? Before we knew how to read, before even we could speak, we had learned to love them. We shouted with pleasure when we turned the pages and saw the spotted cow standing in the daisy-sprinkled meadow, the foolish-looking old sheep with her gambolling lambs, the wise dog with his friendly eyes. They were all real friends to us.

Then a little later on, when we began to ask for stories about the pictures, how we loved them more and more. There was the little girl in the red cloak talking to the great grey wolf with the wicked eyes; the cottage with the bright pink roses climbing round the lattice-window, out of which jumped a little maid with golden hair, followed by the great big bear, the middle-sized bear, and the tiny bear. Truly those stories were a great joy to us, but we would never have loved them quite so much if we had not known their pictured faces as well.

Do you ever wonder how all these pictures came to be made? They had a beginning, just as everything else had, but the beginning goes so far back that we can scarcely trace it.

Children have not always had picture-books to look at. In the long-ago days such things were not known. Thousands of years ago, far away in Assyria, the Assyrian people learned to make pictures and to carve them out in stone. In Egypt, too, the Egyptians traced pictures upon the walls of their temples and upon the painted mummy-cases of the dead. Then the Greeks made still more beautiful statues and pictures in marble, and called them gods and goddesses, for all this was at a time when the true God was forgotten.

Afterwards, when Christ had come and the people had learned that the pictured gods were not real, they began to think it wicked to make beautiful pictures or carve marble statues. The few pictures that were made were stiff and ugly, the figures were not like real men and women, the animals and trees were very strange-looking things. And instead of making the sky blue as it really was, they made it a chequered pattern of gold. After a time it seemed as if the art of making pictures was going to die out altogether.

Then came the time which is called 'The Renaissance,' a word which means being born again, or a new awakening, when men began to draw real pictures of real things and fill the world with images of beauty.

Now it is the stories of the men of that time, who put new life into Art, that I am going to tell you--men who learned, step by step, to paint the most beautiful pictures that the world possesses.

In telling these stories I have been helped by an old book called The Lives of the Painters, by Giorgio Vasari, who was himself a painter. He took great delight in gathering together all the stories about these artists and writing them down with loving care, so that he shows us real living men, and not merely great names by which the famous pictures are known.

It did not make much difference to us when we were little children whether our pictures were good or bad, as long as the colours were bright and we knew what they meant....