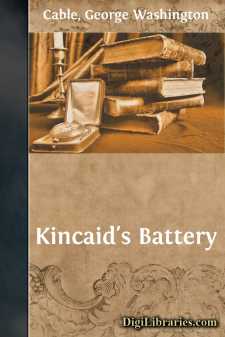 For the scene of this narrative please take into mind a wide quarter-circle of country, such as any of the pretty women we are to know in it might have covered on the map with her half-opened fan.

Let its northernmost corner be Vicksburg, the famous, on the Mississippi. Let the easternmost be Mobile, and let the most southerly and by far the most important, that pivotal corner of the fan from which all its folds radiate and where the whole pictured thing opens and shuts, be New Orleans. Then let the grave moment that gently ushers us in be a long-ago afternoon in the Louisiana Delta.

Throughout that land of water and sky the willow clumps dotting the bosom of every sea-marsh and fringing every rush-rimmed lake were yellow and green in the full flush of a new year, the war year, 'Sixty-one.

Though rife with warm sunlight, the moist air gave distance and poetic charm to the nearest and humblest things. At the edges of the great timbered swamps thickets of young winter-bare cypresses were budding yet more vividly than the willows, while in the depths of those overflowed forests, near and far down their lofty gray colonnades, the dwarfed swamp-maple drooped the winged fruit of its limp bush in pink and flame-yellow and rose-red masses until it touched its own image in the still flood.

That which is now only the "sixth district" of greater New Orleans was then the small separate town of Carrollton. There the vast Mississippi, leaving the sugar and rice fields of St. Charles and St. John Baptist parishes and still seeking the Gulf of Mexico, turns from east to south before it sweeps northward and southeast again to give to the Creole capital its graceful surname of the "Crescent City." Mile-wide, brimful, head-on and boiling and writhing twenty fathoms deep, you could easily have seen, that afternoon, why its turfed levee had to be eighteen feet high and broad in proportion. So swollen was the flood that from any deck of a steamboat touching there one might have looked down upon the whole fair still suburb.

Widely it hovered in its nest of rose gardens, orange groves, avenues of water-oaks, and towering moss-draped pecans. A few hundred yards from the levee a slender railway, coming from the city, with a highway on either side, led into its station-house; but mainly the eye would have dwelt on that which filled the interval between the nearer high road and the levee--the "Carrollton Gardens."

At a corner of these grounds closest to the railway station stood a quiet hotel from whose eastern veranda it was but a step to the centre of a sunny shell-paved court where two fountains danced and tinkled to each other. Along its farther bound ran a vine-clad fence where a row of small tables dumbly invited the flushed visitor to be inwardly cooled. By a narrow gate in this fence, near its townward end, a shelled walk lured on into a musky air of verdurous alleys that led and misled, crossed, doubled, and mazed among flowering shrubs from bower to bower....