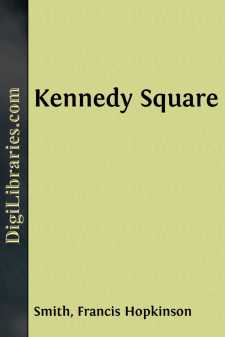 On the precise day on which this story opens—some sixty or more years ago, to be exact—a bullet-headed, merry-eyed, mahogany-colored young darky stood on the top step of an old-fashioned, high-stoop house, craning his head up and down and across Kennedy Square in the effort to get the first glimpse of his master, St. George Wilmot Temple, attorney and counsellor-at-law, who was expected home from a ducking trip down the bay.

Whether it was the need of this very diet, or whether St. George had felt a sudden longing for the out-of-doors, is a matter of doubt, but certain it is that some weeks before the very best shot in the county had betaken himself to the Eastern Shore of Maryland, accompanied by his guns, his four dogs, and two or three choice men of fashion—young bloods of the time—men with whom we shall become better acquainted as these chronicles go on—there to search for the toothsome and elusive canvas-back for which his State was famous.

That the darky was without a hat and in his shirt-sleeves, and it winter—the middle of January, really—the only warm thing about him being the green baize apron tied about his waist, his customary livery when attending to his morning duties—did not trouble him in the least. Marse George might come any minute, and he wanted to be the first to welcome him.

For the past few weeks Todd had had the house to himself. Coal-black Aunt Jemima, with her knotted pig-tails, capacious bosom, and unconfined waist, forty years his senior and ten shades darker in color, it is true, looked after the pots and pans, to say nothing of a particular spit on which her master's joints and game were roasted; but the upper part of the house, which covered the drawing-room, dining-room, bedroom, and dressing-room in the rear, as well as the outside of the dwelling, including even the green-painted front door and the slant of white marble steps that dropped to the brick sidewalk, were the especial property of the chocolate-colored darky.

To these duties was added the exclusive care of the master himself—a care which gave the boy the keenest delight, and which embraced every service from the drawing off of St. George Wilmot Temple's boots to the shortening of that gentleman's slightly gray hair; the supervision of his linen, clothes, and table, with such side issues as the custody of his well-stocked cellar, to say nothing of the compounding of various combinations, sweet, sour, and strong, the betrayal of whose secrets would have cost the darky his place.

"Place" is the word, for Todd was not St. George's slave, but the property of a well-born, if slightly impoverished, gentleman who lived on the Eastern Shore, and whose chief source of income was the hiring out to his friends and acquaintances of just such likely young darkies as Todd—a custom common to the impecunious of those days.

As Mr. Temple, however, did not come under either one of the above-mentioned classes—the "slightly impoverished gentleman" never having laid eyes on him in his life—the negotiations had to be conducted with a certain formality....