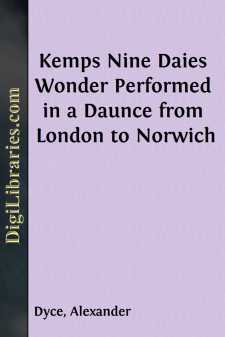 William Kemp was a comic actor of high reputation. Like Tarlton, whom he succeeded “as wel in the fauour of her Maiesty as in the opinion and good thoughts of the generall audience,” he usually played the Clown, and was greatly applauded for his buffoonery, his extemporal wit, and his performance of the Jig.

That at one time,—perhaps from about 1589 to 1593 or later—he belonged to a Company under the management of the celebrated Edward Alleyn, is proved by the title-page of a drama which will be afterwards cited. At a subsequent period he was a member of the Company called the Lord Chamberlain’s Servants, who played during summer at the Globe, and during winter at the Blackfriars. In 1596, while the last-mentioned house was undergoing considerable repair and enlargement, a petition was presented to the Privy Council by the principal inhabitants of the liberty, praying that the work might proceed no further, and that theatrical exhibitions might be abolished in that district. A counter petition, which appears to have been successful, was presented by the Lord Chamberlain’s Servants; and, at its commencement, the names of the chief petitioners are thus arranged:—Thomas Pope, Richard Burbadge, John Hemings, Augustine Phillips, William Shakespeare, William Kempe, William Slye, and Nicholas Tooley.

When Romeo and Juliet and Much ado about Nothing were originally brought upon the stage, Kemp acted Peter and Dogberry; and it has been supposed that in other plays of Shakespeare,—in The Two Gentlemen of Verona, As you like it, Hamlet, The Second Part of Henry the Fourth, and The Merchant of Venice, he performed Launce, Touchstone, the Grave-digger, Justice Shallow, and Launcelot. On the first production of Ben Jonson’s Every Man in his Humour, a character was assigned to him; and there is good reason to believe that in Every Man out of his Humour, by the same dramatist, he represented Carlo Buffone.

In 1599 Kemp attracted much attention by dancing the morris from London to Norwich; and as well to refute the lying ballads put forth concerning this exploit, as to testify his gratitude for the favours he had received during his “gambols,” he published in the following year the curious pamphlet which is now reprinted. A Nine daies wonder was thus entered in the Stationers’ Books:

Ben Jonson alludes to this remarkable journey in Every Man out of his Humour, originally acted in 1599, where Carlo Buffone is made to exclaim “Would I had one of Kemp’s shoes to throw after you!” and again in his Epigrams:—

“or whichDid dance the famous morris unto Norwich.”

So also William Rowley in the prefatory Address to a very rare tract called A Search for Money, &c., 1609, 4to.:—“Yee haue beene either eare or eye-witnesses or both to many madde voiages made of late yeares, both by sea and land, as the trauell to Rome with the returne in certaine daies, the wild morrise to Norrige,” &c. And Brathwait in Remains after Death, &c....