Keeping up with Lizzie 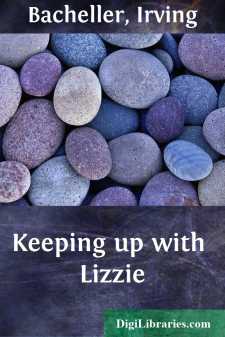 The Honorable Socrates Potter was the only "scientific man" in the village of Pointview, Connecticut. In every point of manhood he was far ahead of his neighbors. In a way he had outstripped himself, for, while his ideas were highly modern, he clung to the dress and manners that prevailed in his youth. He wore broadcloth every day, and a choker, and chewed tobacco, and never permitted his work to interfere with the even tenor of his conversation. He loved the old times and fashions, and had a drawling tongue and often spoke in the dialect of his fathers, loving the sound of it. His satirical mood was sure to be flavored with clipped words and changed tenses. The stranger often took him for a "hayseed," but on further acquaintance opened his mouth in astonishment, for Soc. Potter, as many called him, was a man of insight and learning and of a quality of wit herein revealed. He used to call himself "an attorney and peacemaker," but he was more than that. He was the attorney and friend of all his clients, and the philosopher of his community. If one man threatened another with the law in that neighborhood, he was apt to do it in these terms, "We'll see what Soc. Potter has to say about that."

"All right! We'll see," the other would answer, and both parties would be sure to show up at the lawyer's office. Then, probably, Socrates would try his famous lock-and-key expedient. He would sit them down together, lock the door, and say, "Now, boys, I don't believe in getting twelve men for a job that two can do better," and generally he would make them agree.

He had an office over the store of Samuel Henshaw, and made a specialty of deeds, titles, epigrams, and witticisms.

He was a bachelor who called now and then at the home of Miss Betsey Smead, a wealthy spinster of Pointview, but nothing had ever come of it.

He sat with his feet on his desk and his mind on the subject of extravagance. When he was doing business he sat like other men, but when his thought assumed a degree of elevation his feet rose with it. He began his story by explaining that it was all true but the names.

[Illustration: With his mind on the subject of extravagance.]

"This is the balloon age," said he, with a merry twinkle in his gray eyes. "The inventor has led us into the skies. The odor of gasoline is in the path of the eagle. Our thoughts are between earth and heaven; our prices have followed our aspirations in the upward flight. Now here is Sam Henshaw. Sam? Why, he's a merchant prince o' Pointview—grocery business—had a girl—name o' Lizzie—smart and as purty as a wax doll. Dan Pettigrew, the noblest flower o' the young manhood o' Pointview, fell in love with her. No wonder. We were all fond o' Lizzie. They were a han'some couple, an' together about half the time.

"Well, Sam began to aspire, an' nothing would do for Lizzie but the Smythe school at Hardcastle at seven hundred dollars a year. So they rigged her up splendid, an' away she went....