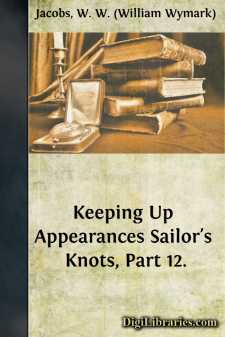 "Everybody is superstitious," said the night-watchman, as he gave utterance to a series of chirruping endearments to a black cat with one eye that had just been using a leg of his trousers as a serviette; "if that cat 'ad stole some men's suppers they'd have acted foolish, and suffered for it all the rest of their lives."

He scratched the cat behind the ear, and despite himself his face darkened. "Slung it over the side, they would," he said, longingly, "and chucked bits o' coke at it till it sank. As I said afore, everybody is superstitious, and those that ain't ought to be night-watchmen for a time—that 'ud cure 'em. I knew one man that killed a black cat, and arter that for the rest of his life he could never get three sheets in the wind without seeing its ghost. Spoilt his life for 'im, it did."

He scratched the cat's other ear. "I only left it a moment, while I went round to the Bull's Head," he said, slowly filling his pipe, "and I thought I'd put it out o' reach. Some men——"

His fingers twined round the animal's neck; then, with a sigh, he rose and took a turn or two on the jetty.

Superstitiousness is right and proper, to a certain extent, he said, resuming his seat; but, o' course, like everything else, some people carry it too far—they'd believe anything. Weak-minded they are, and if you're in no hurry I can tell you a tale of a pal o' mine, Bill Burtenshaw by name, that'll prove my words.

His mother was superstitious afore 'im, and always knew when 'er friends died by hearing three loud taps on the wall. The on'y mistake she ever made was one night when, arter losing no less than seven friends, she found out it was the man next door hanging pictures at three o'clock in the morning. She found it out by 'im hitting 'is thumb-nail.

For the first few years arter he grew up Bill went to sea, and that on'y made 'im more superstitious than ever. Him and a pal named Silas Winch went several v'y'ges together, and their talk used to be that creepy that some o' the chaps was a'most afraid to be left on deck alone of a night. Silas was a long-faced, miserable sort o' chap, always looking on the black side o' things, and shaking his 'ead over it. He thought nothing o' seeing ghosts, and pore old Ben Huggins slept on the floor for a week by reason of a ghost with its throat cut that Silas saw in his bunk. He gave Silas arf a dollar and a neck-tie to change bunks with 'im.

When Bill Burtenshaw left the sea and got married he lost sight of Silas altogether, and the on'y thing he 'ad to remind him of 'im was a piece o' paper which they 'ad both signed with their blood, promising that the fust one that died would appear to the other. Bill agreed to it one evenin' when he didn't know wot he was doing, and for years arterwards 'e used to get the cold creeps down 'is back when he thought of Silas dying fust. And the idea of dying fust 'imself gave 'im cold creeps all over.

Bill was a very good husband when he was sober, but 'is money was two pounds a week, and when a man has all that and on'y a wife to keep out of it, it's natural for 'im to drink....