Keeping Fit All the Way 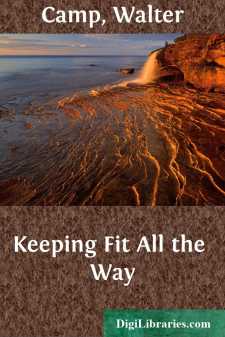 It has long been a startling fact regarding Americans that so soon as their school-days were over they largely abandoned athletics; until, in middle life, finding that they had been controverting the laws of nature, they took up golf or some other form of physical exercise.

The result of such a custom has been to lower the physical tone of the race. Golf is a fine form of exercise, but in an exceedingly mild way. No one claims that it will build up atrophied muscles nor, played in the ordinary way, that it will induce deep breathing; nor, except in warm weather, that it will produce any large amount of skin action. Hence it is easy to imagine the condition of the man who at the end of his 'teens gave up athletics, and then did nothing of a physically exacting nature until he took up golf. Now if in addition to his pastime and relaxation he will do something in the way of setting-up exercises to open up his chest and make his carriage erect, thus enabling his heart and lungs to have a better chance, he will more than double the advantages coming from his golf. He will then walk more briskly and will gain very much in physical condition.

One thing that our middle-aged men, and in fact many of us who have not yet reached that way mark, have entirely forgotten is that Nature is very chary of her favors. Our primal mother is just and kind, but she has little use for the man who neglects her laws. When a man earns his bread by the sweat of his brow she maintains him in good physical condition. When he rides in a motor-car instead of walking she atrophies the muscles of his legs, hangs a weight of fat around his middle, and labels him "out of the running." If he persists in eating and not physically exerting himself, she finally concludes that he is cumbering the earth, and she takes him off with Bright's or diabetes. It does not do him any good to tell her that he was too busy to walk and so had to ride, or that he had no time for exercising; she simply pushes him off to make way for a better man.

Nature has given man two ways (outside of the action of the bowels) of getting rid of impurities, one by means of the skin and the other by means of the kidneys. It is like a motor-car with two cylinders. If one stops the other will run on for a time, but its wear is increased. When a man stops exercising and ceases to carry off by means of his skin some of these impurities, he throws an additional load on his kidneys. When a man goes without exercise and begins to accumulate fat, that fat gradually deposits itself and not alone about the waist; it invades the muscular tissue all over his body even to his heart. As this accumulation grows there come with it a muscular slackness and a disinclination to exercise. The man is carrying greater weight and with less muscular strength to do it. No wonder that when he tries to exercise he gets tired. He is out of condition. Hence he begins to revolve in a vicious circle. He knows that he needs exercise to help take off the fat, but exercise tires him so much, on account of the fat, that he becomes exhausted; usually he gives it up and lets himself drift again....