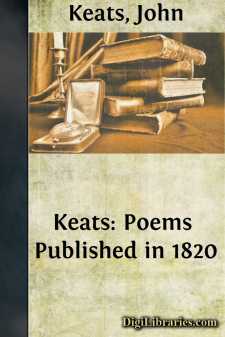 Of all the great poets of the early nineteenth century—Wordsworth, Coleridge, Scott, Byron, Shelley, Keats—John Keats was the last born and the first to die. The length of his life was not one-third that of Wordsworth, who was born twenty-five years before him and outlived him by twenty-nine. Yet before his tragic death at twenty-six Keats had produced a body of poetry of such extraordinary power and promise that the world has sometimes been tempted, in its regret for what he might have done had he lived, to lose sight of the superlative merit of what he actually accomplished.

The three years of his poetic career, during which he published three small volumes of poetry, show a development at the same time rapid and steady, and a gradual but complete abandonment of almost every fault and weakness. It would probably be impossible, in the history of literature, to find such another instance of the 'growth of a poet's mind'.

The last of these three volumes, which is here reprinted, was published in 1820, when it 'had good success among the literary people and . . . a moderate sale'. It contains the flower of his poetic production and is perhaps, altogether, one of the most marvellous volumes ever issued from the press.

But in spite of the maturity of Keats's work when he was twenty-five, he had been in no sense a precocious child. Born in 1795 in the city of London, the son of a livery-stable keeper, he was brought up amid surroundings and influences by no means calculated to awaken poetic genius.

He was the eldest of five—four boys, one of whom died in infancy, and a girl younger than all; and he and his brothers George and Tom were educated at a private school at Enfield. Here John was at first distinguished more for fighting than for study, whilst his bright, brave, generous nature made him popular with masters and boys.

Soon after he had begun to go to school his father died, and when he was fifteen the children lost their mother too. Keats was passionately devoted to his mother; during her last illness he would sit up all night with her, give her her medicine, and even cook her food himself. At her death he was brokenhearted.

The children were now put under the care of two guardians, one of whom, Mr. Abbey, taking the sole responsibility, immediately removed John from school and apprenticed him for five years to a surgeon at Edmonton.

Whilst thus employed Keats spent all his leisure time in reading, for which he had developed a great enthusiasm during his last two years at school. There he had devoured every book that came in his way, especially rejoicing in stories of the gods and goddesses of ancient Greece. At Edmonton he was able to continue his studies by borrowing books from his friend Charles Cowden Clarke, the son of his schoolmaster, and he often went over to Enfield to change his books and to discuss those which he had been reading. On one of these occasions Cowden Clarke introduced him to Spenser, to whom so many poets have owed their first inspiration that he has been called 'the poets' poet'; and it was then, apparently, that Keats was first prompted to write....