Kate Bonnet The Romance of a Pirate's Daughter 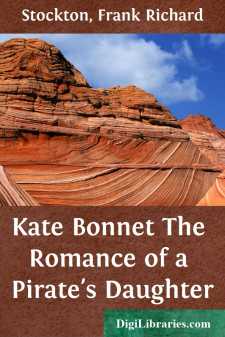 CHAPTER I TWO YOUNG PEOPLE, A SHIP, AND A FISH

The month was September and the place was in the neighbourhood of Bridgetown, in the island of Barbadoes. The seventeenth century was not seventeen years old, but the girl who walked slowly down to the river bank was three years its senior. She carried a fishing-rod and line, and her name was Kate Bonnet. She was a bright-faced, quick-moving young person, and apparently did not expect to catch many fish, for she had no basket in which to carry away her finny prizes. Nor, apparently, did she have any bait, except that which was upon her hook and which had been affixed there by one of the servants at her home, not far away. In fact, Mistress Kate was too nicely dressed and her gloves were too clean to have much to do with fish or bait, but she seated herself on a little rock in a shady spot not far from the water and threw forth her line. Then she gazed about her; a little up the river and a good deal down the river.

It was truly a pleasant scene which lay before her eyes. Not half a mile away was the bridge which gave this English settlement its name, and beyond the river were woods and cultivated fields, with here and there a little bit of smoke, for it was growing late in the afternoon, when smoke meant supper. Beyond all this the land rose from the lower ground near the river and the sea, in terrace after terrace, until the upper stretches of its woodlands showed clear against the evening sky.

But Mistress Kate Bonnet now gazed steadily down the stream, beyond the town and the bridge, and paid no more attention to the scenery than the scenery did to her, although one was quite as beautiful as the other.

There was a bunch of white flowers in the hat of the young girl; not a very large one, and not a very small one, but of such a size as might be easily seen from the bridge, had any one happened to be crossing about that time. And, in fact, as the wearer of the hat and the white flowers still continued to gaze at the bridge, she saw some one come out upon it with a quick, buoyant step, and then she saw him stop and gaze steadily up the river. At this she turned her head, and her eyes went out over the beautiful landscape and the wide terraces rising above each other towards the sky.

It is astonishing how soon after this a young man, dressed in a brown suit, and very pleasant to look upon, came rapidly walking along the river bank. This was Master Martin Newcombe, a young Englishman, not two years from his native land, and now a prosperous farmer on the other side of the river.

It often happened that Master Newcombe, at the close of his agricultural labours, would put on a good suit of clothes and ride over the bridge to the town, to attend to business or to social duties, as the case might be. But, sometimes, not willing to encumber himself with a horse, he walked over the bridge and strolled or hurried along the river bank. This was one of the times in which he hurried. He had been caught by the vision of the bunch of white flowers in the hat of the girl who was seated on the rock in the shade....